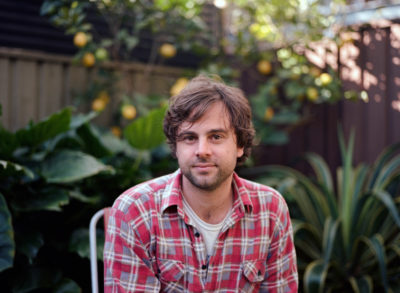 Max Easton on ‘The Magpie Wing’

The Magpie Wing (Giramondo, September) is Max Easton’s first book of fiction. Set in western Sydney, the novel follows the relationships between three young adults as they explore subcultures and identities. Reviewer Brad Jefferies calls it ‘a moving portrait of a city and region undergoing enormous change, told through the perspectives of three unique, sympathetic and vulnerable characters’. He spoke to the author.

The Magpie Wing is marked by a visceral sense of place owing to the use of very specific locations in and around suburban Liverpool and the Inner West. There’s a sense of melancholy too in the way these places have changed since the 90s. What is your relationship with these areas and what were you trying to capture in your depictions of them?

I wanted the depictions to be as honest and time-accurate as I could write them. My relationship with all the locations in the book are very close, having lived in Liverpool into my early 20s, and in the Inner West more or less since then. It’s interesting that you note a sense of melancholy. For the characters in the book at least, there’s a mournful quality to the change of somewhere like the Liverpool CBD because it indicates something is moving on from them. The locations the characters either embrace or reject tend to be pretty close to their notions of identity, so it’s not an accidental allegory if a sense of mourning comes as the high-rises creep in on Liverpool, or the evolving venues of the Inner West grow stale.

Can you talk a little bit about why you decided to have the book told by three protagonists—Walt, Helen and Duncan—and what having multiple points of view allowed you to achieve?

I never thought about writing this through one character’s perspective. In early drafts, I spent a lot of time on stories written from their parents’ point of view, which ended up being scrapped to focus on the three core characters. For me, multiple protagonists meant that opposing ideas could be deepened by characterisation; it allowed for a natural turning over of thoughts and feelings. Duncan becomes something of a snakish, centrist figure; Helen seeks freedom to the point of bordering on the libertarian; and Walt is staunchly moralistic, but blind to his hypocrisy. I enjoyed playing out their reactions to the book’s events, and speculating on how that forms them. I don’t think I’m skilled enough as a writer to do that in the first person or for a single character, where it could all get reduced to internal conflict via an atomised individual’s thought process. It was easier for me to compare and contrast people.

Walt in particular seems to vacillate between resignation that he’s up against the immoveable forces of capitalism and a sense of hope and possibility for the things he loves: his rugby team, the area in which he grew up, working class identity and solidarity. Are you optimistic that some of the ideas Walt holds dear remain possible?

I’m generally optimistic about his notions of solidarity. I do think that there are common aspects in all social pursuits, and that moments when people come together around common ideals are moments of solidarity whether we acknowledge it or not. I found Walt interesting to explore some of those ideas through, because he’s also quite stubborn and naive, but prone to moments of crushing self-awareness. I think his emotions are good parallels for things that I’ve felt, like acknowledging the fact that forces of financialisation permanently altered the course of rugby league, or constantly chip at the boundaries of underground music communities. I think Walt is determined and resilient, which I’m optimistic about as a character trait, but I also wanted him to be read psychologically as something of a glutton for punishment, which I think would be relatable for anyone who feels like they’re on a progressive wing of their community.

Rugby league is not a typical subject for Australian literature and despite not knowing much about it myself I found it to be a fascinating topic for exploration. Could you explain your interest in the sport, particularly in reference to the Western Suburbs Magpies, and why you wanted to write about it?

I grew up in south west Sydney where Wests were based through the 90s, and I played rugby league in their junior district from age six into my 20s, so I was around the edges of the organisation for a long time. When I moved out of the rugby league heartland of (largely) working class Liverpool and into the Inner West which is more broadly middle class, I was shocked by how little people cared about the sport, and even seemed to think it was beneath them. I learned not to talk about it around people in the arts or music scenes in the 2010s and that might have been one of my first notions of (symbolic) class identity. I still find that really interesting, because isn’t it just a game!?

I wanted to write about rugby league in the novel because there’s a long history of condescending attitudes to rugby league that stem from the sport’s origins as a pay dispute, when the game broke away from rugby union who refused to compensate players until 1995. Wests in particular represented this whole other strata within the NSW rugby league during periods of financial growth: calling themselves the ‘Fibros’ to represent the ways of living of the people of Lidcombe; hounded by 60 Minutes for being too violent; on the brink of bankruptcy from the 80s onwards. I think the heart of the book sits in those histories, and has parallels in a whole world of power structures and mythologised underclasses.

Are there other books—fiction or nonfiction—that you’ve read that you would recommend to people interested in this approach to understanding rugby league, or to use Walt’s wording, ‘rugby league’s radical potential’? If not, why do you think there is an absence of writing or thinking about the sport in this way?

I haven’t come across a whole lot of writing with a specifically radical read of rugby league’s history, but that’s dying to be written. Tony Collins has written well about it from a northern English perspective in Rugby League: A people’s history. There are many moments in the backlogs of the Rugby League Digest podcast that background the forces of labour in the context of the 90s Super League war too. It’s hard with sports writing, which often gets lost to biography of individual excellence rather than collective or social factors.

I could only speculate on why there’s an absence in writing about rugby league. I’ve heard it said anecdotally that publishers don’t think rugby league books can sell (of that, Walt would say they think rugby league people can’t read), but who knows. I’m happy to just put it down to elitism while reminding the Books+Publishing subscription base that I’m between projects at the moment.

What was your experience of writing the novel compared to your other artistic practice as a musician? What does writing allow you to do that’s different to your other pursuits?

I’ve only played music in supporting roles via drums, guitar or bass, so for me, music is a contribution to a collective thing, but writing is solitary. The world of underground or punk music is very community-oriented, and performing it is more tangible to me; it’s something I throw my body into rather than think about, more instinctive and physical in that sense. I find writing to be incredibly insular, very nebulous and all in the fog of the brain. I suppose the difference is that writing lets me try to work through things I’ve been thinking or feeling, like working on a filing cabinet. Whenever I finish a writing project I get the exact same sense of relief that I do when I submit my taxes.