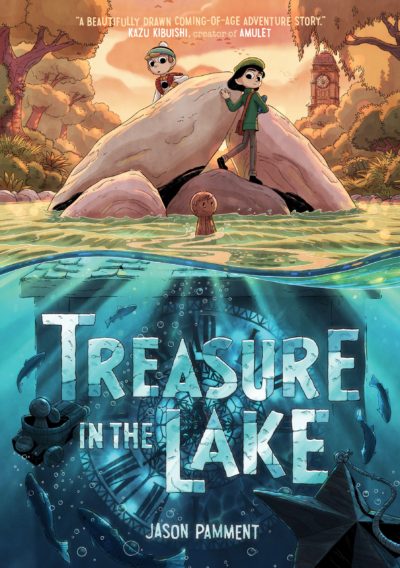 Friendship, hidden cities and all-round adventure lie at the heart of Jason Pamment’s immersive graphic novel Treasure in the Lake. Sam and Iris have been best friends since they were little, but as the two find themselves about to venture into high school, it’s unclear if their friendship will survive. Iris is desperate to escape the small town they live in; frustrated with its limitations, she longs for adventure. Sam, however, struggles to understand her desire to escape, content with life in their close-knit community. A dried-up lake and uncovered artefacts lead an adventurous Iris and a loyal Sam into the world of a hidden city. As they discover its secrets they learn more about themselves, what their friendship means, and ultimately gain a new appreciation for home. With a background in comics, animation, video games and children’s TV, Pamment is a skilled visual storyteller and unfolds the story scene by scene with his vivid illustrations. He captures a strong sense of time and place and brings his colourful cast of characters to life through dynamic dialogue and text. Pamment brings a fresh voice to the growing and evolving genre of graphic novels aimed at a middle-grade audience. His style will capture the attention of both avid and reluctant readers in the 8–12 age group, pulling them into Iris and Sam’s world and providing a few unexpected twists along the way.

M H Alessandrino is a Perth-based writer and a freelance reviewer.