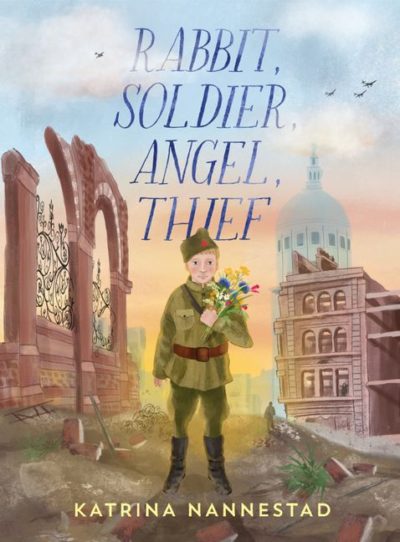 Rabbit, Soldier, Angel, Thief is a historical novel for middle-grade readers set during WWII. Young Sasha lies in a hospital in Berlin, recovering after the end of the war. His recollections take the reader back to 1942, where a six-year-old Sasha lives in a picturesque village in rural Russia. After German soldiers burn his village to the ground he escapes into the forest alone, where he is taken in by a company of Red Army soldiers. Sasha becomes their mascot and helper, accompanying them first to Stalingrad and then to Berlin. Sasha is sweet and loving and remains remarkably untraumatised by the war raging around him. All the Red Army soldiers he encounters are gentle and kind to him—the story is so positive it could serve as the propaganda Sasha reads in the newspapers he scavenges. The novel is told from a young child’s perspective but even so is often simplistic and sentimental, without, for example, the depth and pathos of books by Morris Gleitzman or Jackie French. Nevertheless, Rabbit, Soldier, Angel, Thief is a fascinating tale that shines a light on a lesser-known side of WWII. The flashbacks create tension and structure to keep the reader engaged, while the real-life basis will intrigue younger readers interested in history.