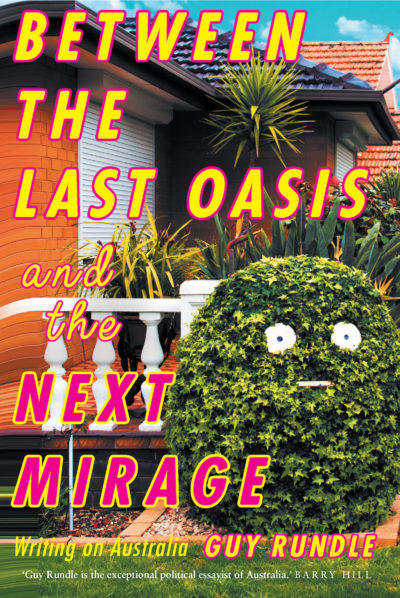 Between the Last Oasis and the Next Mirage: Writing on Australia (Guy Rundle, MUP)

Guy Rundle lives off his wits. Correspondent-at-large for Crikey, a founding editor of the left-wing journal Arena, former sketch comedy show producer and famed writer of lives, Rundle produces writing as varied as it is prolific. This latest collection of his political writing, following from 2019’s Practice: Journalism, essays and criticism, can only be roughly split into sections. The book mixes gonzo reportage of political campaigns in recent Australian and American elections with in-depth theoretical analysis of the historico-political context in which these reportages must be considered. It also includes more anecdotal, romantic and often incredibly moving meditations on the day-to-day lives onto which politics is seared, and the individuals who feel its flame most acutely. Rundle’s work represents a legitimately home-grown organic social theory that can think in the local and in the abstract, through history and into posterity. For this reason, the sections that make up his latest collection can only be tentatively distinguished—they fit together as an all-encompassing vision of what politics means. Rundle’s conception of a left-wing politics faced with imminent climate collapse and the insidious individuation associated with neoliberalism, recognises that we must grant as much time to the people who dedicate their lives to the dirty work of getting things done as we do to more abstract political theory. From the pub to the campaign trail, the personalities depicted in Between the Last Oasis and the Next Mirage are rendered with such acuity because they matter. This collection is a fraction of Rundle’s boundless writerly output. It is a book for anyone who believes that left-wing political thinking must refocus its attention towards radicalism and humanity.

Jeremy George works as a bookseller at Readings.