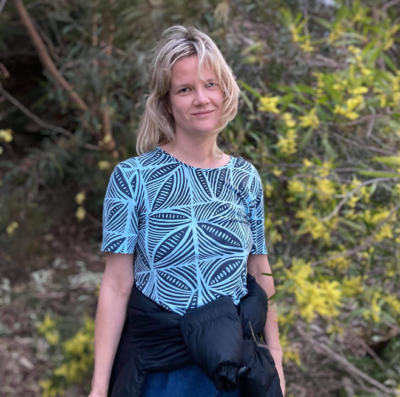 Selected from a shortlist of seven announced earlier this month, the Sydney poet receives $40,000 and publication by Vagabond Press.

The award judges said of ‘Running Time’: ‘Amid doubt, shame, need and fear, there is courage and insouciance, the subtle pleasure of stretching meaning into a variety of imaginative spaces that open up the limits of conventional language and syntax.’

Stewart is the author of numerous chapbooks including Like (Bulky News Press) and The Internet Blue (First Draft). Her debut poetry collection Knocks (Vagabond Press) won the inaugural Noel Rowe Poetry Award. She was formerly the poetry editor at Giramondo Publishing and is currently completing a creative doctorate at the Writing and Society Research Centre at Western Sydney University.

‘My sincere thanks for this generous bequest, which periodically makes visible the extraordinary creative commitment of women across the country. I am honoured to be in the company of such radiant peers on this year’s shortlist, as well as among the cohort of women previously awarded—Pip Smith, Fiona Hile and Melinda Bufton—three poets whose work has shaped my own in untold ways. This prize will be transformative for my creative practice and has shifted the horizon line of what’s possible,’ said Stewart.

Jeanine Leane was the runner-up and was awarded the School of Literature, Art and Media (SLAM) Poetry Award for her manuscript ‘Gawimarra-Gathering’. The judges called Leane’s manuscript ‘a powerhouse of vivid imagery, language and story’. It is the first time a First Nations woman poet has been recognised with the award.

Leane said: ‘It’s a tremendous honour as a First Nations poet to be shortlisted for the Helen Anne Bell Poetry Bequest and an honour for my manuscript to recognised through the School of Literature Art and Media poetry award.’

This year the biennial award increased its cash prize from $7000 to $40,000, making it the richest poetry prize in Australia. Presented by the Department of English at the University of Sydney, the Helen Anne Bell Poetry Bequest Award is funded by the bequest of former student Helen Anne Bell.