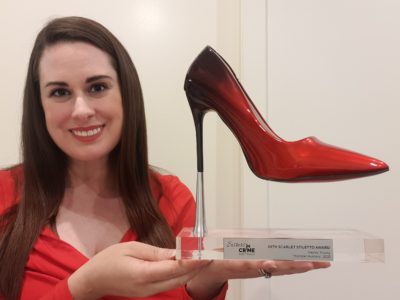 Sisters in Crime Australia has announced the winners of the 2021 Scarlet Stiletto Awards.

Jaclyn Riley-Smith, based in Margate, Tasmania, won second prize ($1000) for her story ‘On the Inside’, a ‘witty story about insider trading and a raid by the corporate watchdog’. Last year Riley-Smith won first prize in the Banjo Paterson Writing Awards for her short story ‘Literally the Worst’.

Third prize ($600) went to Elsternwick, Victoria writer Ellen Coates for her story ‘The Gospel of Cecily’, set in Hereford in 1200. Coates also took out the Clan Destine Press Cross-Genre Award ($750).

This year two new awards were introduced, which bumped up the total prize money to a record $11,910. The inaugural Best Art and Crime Story Award ($750) was awarded to Caroline de Costa for ‘The Fragrance of the Corpse Flower’, set in a university botany school. Meanwhile, Stephanie Holm from Riverside, Tasmania won the new Best Environmental Mystery Award ($750) for ‘Mystery Off the Jillawong Road’.

Other awards presented at the online event were:

In their 28th year, the awards celebrate the best short crime and mystery stories written by women in Australia. For more information, and to view the full list of winners, see the website.