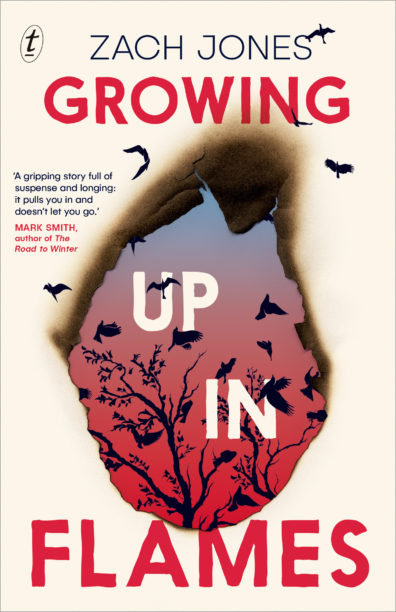 Zach Jones’s debut novel Growing Up in Flames is as gritty as bushfire ash. Written for a doctorate in creative writing at the University of the Sunshine Coast, the novel’s provenance is evident in Jones’s masterly use of the extended metaphor of fire to explore the relationship between intergenerational trauma and adolescent identity formation. In the present day, Kenna is living in what she perceives as exile with her uncle’s family in small-town rural Australia, following the death of her mother Ava in a bushfire. Noah is similarly trapped in Kimba as the sole caregiver for his mentally ill mother. When Kenna catches Noah burning his father’s store to the ground, she finds a new focus for her all-consuming anger. The enmity between Kenna and Noah transforms after Noah’s mother reveals details of Kenna’s own mother’s secret past in Kimba. Kenna’s search for the truth, interspersed with the story of the past unravelled through Ava’s diary entries and chapters from the perspective of her first boyfriend, brings the novel to a crescendo of pain, suffering and regret. In its aftermath, however, there is hope, and some degree of recovery and forgiveness seems possible. This is a confronting but ultimately rewarding read that will appeal to older teenage readers and adults who were moved by Eleni Hale’s Stone Girl.