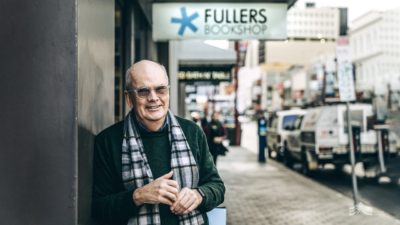 Long-time owner of Fullers Bookshop in Tasmania Clive Tilsley, writers Alice Pung and Lynne Kelly, and cookbook author Maggie Beer are among those to be recognised in the General Division of the Order of Australia in this year’s Australia Day Honours.

Tilsley is the recently retired former owner of Fullers Bookshop. Tilsley bought the Hobart store in 1982, establishing and running a second store in Launceston from 2001 to 2014, when it was sold to Volume 2 Books. Tilsley sold Fullers Hobart to long-time Fullers bookseller Tim Jarvis in 2021 and now lives in South Australia.

Both Pung and Tilsley were recognised for ‘service to literature’.

Kelly was recognised for significant service to science education as a writer and researcher. She is the author of books including nonfiction bestseller The Memory Code (A&U), the 2019 title Memory Craft (A&U) and the Victorian Premier’s Literary Award-shortlisted Songlines: The power and promise, co-authored with Margo Neale and part of Thames & Hudson’s ‘First Knowledges’ series.

Beer, the author of eight cookbooks, is recognised for distinguished service to the tourism and hospitality industries as a cook, restaurateur and author, and to aged welfare.

Other recipients of the General Division of the Order of Australia in 2022 include Lynn Fletcher, who has held roles with the Centre for Australian Children’s Literature and The School Magazine, for service to the arts through children’s literature; John Gladstones, author of Wine, Terroir and Climate Change (Wakefield) and Viticulture and Environment, for distinguished service to primary industry, particularly agriculture and viticulture, and as an author; Virginia Baxter and Keith Gallasch, founding editors of national arts magazine RealTime, for significant service to the arts though performance, writing and production; and Nicholas Underwood for service to the community, and to travel writing.