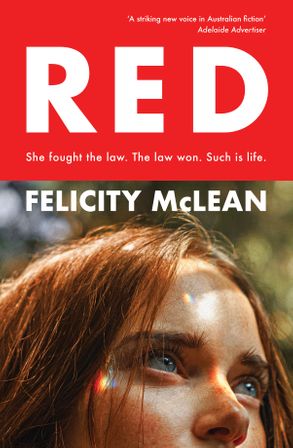 Ruby ‘Red’ McCoy wants people to hear her side of the story. She knows what the police are saying, and she knows what’s been reported in the media—but none of that is what really happened. Felicity McLean’s new novel, her second after 2019’s The Van Apfel Girls Are Gone, takes on the story of Ned Kelly and reimagines it in a new context. It’s the late 80s, and instead of the bearded bushranger the protagonist is a fiery teenage girl. Red and her father Sid try to live a quiet life, but a family feud stretching back three generations means that a local police sergeant has his sights set on bringing them down. Filled with simmering tension, Red is both tragic and darkly comedic, exploring police corruption, lost potential and the sometimes crushing weight of societal expectation. The novel is written entirely in Red’s voice, in a frenetic, conversational style peppered with plenty of ‘yeahs’ and minimal punctuation. It’s a technique that serves multiple purposes, plunging the reader directly into Red’s perspective, underscoring the idea that the ‘truth’ of history depends on whose perspective we listen to, and is a nod to Kelly’s own manifesto outlining his side of things. It isn’t necessary to know anything about Kelly’s story when reading Red—the novel stands alone. But for those with even a passing familiarity, the references—both overt and subtle—enhance the overall read. By drawing inspiration from Kelly, McLean shines a light on the idea that, though over 100 years have passed, too many ugly truths stay the same.

Elizabeth Flux is a freelance writer and editor.