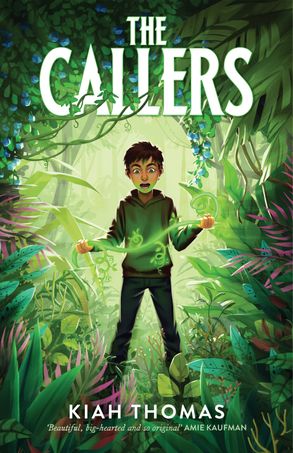 Publishing simultaneously in Australia and the US, The Callers—Kiah Thomas’s first foray into middle-grade fiction—is a thoughtful, nuanced fantasy adventure in which two young people fight back against a colonising force that is devastating the environment. Quin lives in a world in which certain people, including his mother and sister, have the ability to Call objects into existence. After failing his Calling exam, Quin finds himself transported to an unfamiliar land by Allie, a young girl who quickly educates him about the true nature of Calling. Allie’s homeland has been ruthlessly plundered by his own, its resources stolen by the act of Calling and the inhabitants forced into servitude. Quin and Allie join forces to save her people from their colonisers, but when Quin is suddenly Called home by his mother, he must determine who he can trust in a world reliant on Calling for survival. The Callers is at once a lovely fantasy adventure and an interrogation of the effects of colonisation on society and the environment. It gently encourages young readers to consider the origins of their food and goods, and those who produce them. Independent readers aged 8–12 will love this highly adventurous story and, if read together, it is the perfect tool for adults to use to initiate conversations about complex topics.

Hannah Gardiner has been a bookseller since 2005 and currently works as a children’s buyer. Read her interview with Kiah Thomas about The Callers here.