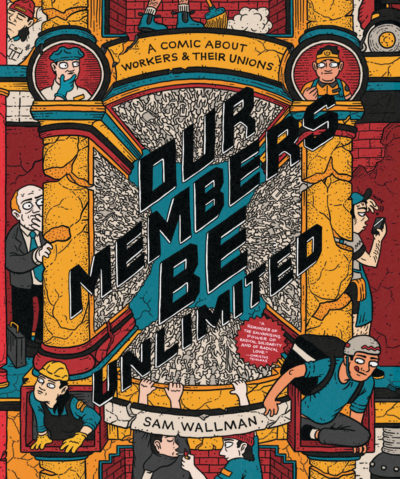 Unionism is about more than your rights at work. It is something greater even than a form of politics at the point of production: union struggle is composed of those mundane moments of perseverance and ingenuity in daily life that are all too easy to pass over in retrospect. This is the history that Sam Wallman uncovers in his magnificent new longform comic, Our Members Be Unlimited. Noting that unionism has a ‘different texture’ to other forms of political action, Wallman fills his panels with those kinds of daily acts of cooperation and resistance. With his unmistakable animated and intricate graphic style, Wallman is skilled at stitching these quotidian details into a broader narrative of working-class history: from the knowing nods and oaths of secrecy of the earliest worker alliances to those modern breakroom conversations that are the starting point for many union campaigns. It is the sheer givenness of the present, Wallman shows, that tends to obscure this material history: sick leave, the eight-hour day and even the weekend had to be won by workers little more than a century ago. These achievements are so fundamental to our daily working lives that it is easy to forget that workers struggled and died for them, just as the on-the-ground practice of organising might not seem to add up to much day to day. But Wallman does not merely document the past: some of the most visually beautiful and moving sections of the book describe his time working to build a nascent union at an Amazon warehouse in Melbourne, and there he reflects lucidly on the difficulties and failures encountered along the way. Learned and extensively researched, this book is also practical, ending with a sizeable glossary of useful union terms, from ‘black cat’ to ‘ultra’. Wallman’s activist energy, familiar to anyone who has read his shorter comics or seen his posters pasted up around their city, makes this graphic history urgent and invigorating reading.

Joshua Barnes is a writer and bookseller in Melbourne.