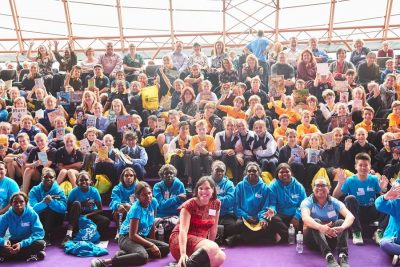 Over 30,000 students, libraries and other organisations have taken part in the Great Book Swap campaign for Indigenous Literacy Day (ILD), held this year on 5 September.

The Indigenous Literacy Foundation (ILF) expects to raise over $300,000 from Great Books Swap events, and has already raised over $51,000 from a new campaign called Fill a Bookshelf, which asks Australians to sign up to a virtual bookshelf where they can donate to the cause.

More than 700 schools, creches, libraries and workplaces held Great Book Swap events on ILD and in the lead-up to the day. Funds raised from ILD will allow the Indigenous Literacy Foundation (ILF) to continue its work providing free culturally appropriate books in more than 250 remote communities.

A series of nine books, written in Kriol by Karen Manbulloo and women from the Binjari community, was launched at the Sydney Opera House on ILD. At the event, eight students from Katherine read several books in the ‘Binjari Buk’ series to the audience, with pairs of students reading in Kriol and English. Students from over 20 Sydney schools attended the event, along with ILF ambassadors Justine Clarke, Natalie Ahmat, Josh Pyke and Alison Lester.

One book in the ‘Binjari Buk’ series, Moli det bigibigi (Molly the Pig), about a Weetbix-devouring pig, will be available nationally through bookshops and will be distributed to remote communities by the ILF’s book supply program. The ILF has also produced a short animation from the book.

At an event in Melbourne’s Federation Square, authors Andy Griffiths, Gregg Dreise, Anita Heiss and Aunty Joy Murphy entertained the audience, which included students from various Melbourne schools. The book Deadly Sisters of Worawa, written by 13 students from the Worawa Aboriginal College in Healesville with Heiss and Shelley Ware, was launched at the event and two students read their own stories from the book.

Final figures for money raised from ILD will be released in six to eight weeks.