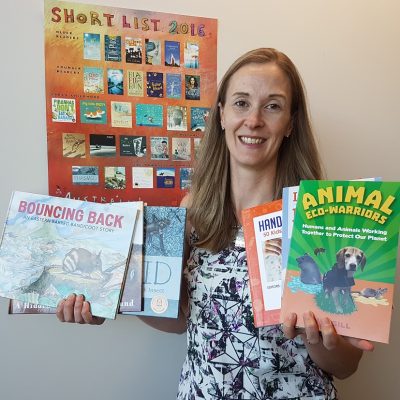 In 2015 CSIRO Publishing launched its first children’s book Phasmid, the story of the rediscovery of the Lord Howe Island Stick Insect previously believed to be extinct. The publisher has since released a number of children’s books that aim to ‘introduce the next generation to science, show them how science is part of their everyday lives, and that science is fun and exciting’. Think Australian spoke to CSIRO Publishing’s books publishing director Briana Melideo.

We aim to publish books that entertain, encourage and inspire young readers to see the science that is all around them. Our publishing criteria tends to remain the same whether a title is pitched at children or for an adult audience—we generally look for a uniquely Australian story, relevant, topical and one that communicates important science issues. Our children’s range in particular offers readers an opportunity to see how diverse and fascinating science can be, as well as how science can help solve problems.

How many children’s books do you publish each year—and what kinds of books?

Our first book was published in September 2015 and since then we’ve been steadily increasing the number of titles year on year. In 2019 we hope to publish four to five titles in the children’s program, complementing our strong list of award-winning backlist. Our program highlights relatable Australian content and engages our readers in the practical applications of science. This helps them to see how they can be part of the solution in the future. We have a strong environmental focus, but also have an activities book that was developed from our Double Helix magazine content, as well as topics such as future technologies and animal eco-warriors.

Have you sold international rights to your children’s books?

Not yet, but we are developing a rights catalogue to maximise translation opportunities in foreign language markets and we recently attended the Beijing International Book Fair to gauge interest. The strongest interest so far has been for illustrated children’s titles with a strong environmental message.

Have you acquired the rights to publish any international children’s titles in Australia?

To date we have focused our attention on local titles, but we are interested in exploring the potential for acquiring international titles. While our program is focused on Australian stories, science is a global topic, so we would be looking for titles with inspiring and engaging science content, which are also relevant and interesting for local audiences.

Which children’s title on your list do you believe deserves bigger recognition overseas?

Australian fauna and flora is special and unique so there is worldwide interest in books on these topics. Our first book entitled Phasmid: Saving the Lord Howe Island Stick Insect is based on a subject which could be perceived as being particularly niche. However, the actual fact is that the rediscovery of this species (which was believed extinct) made worldwide headlines at the time, and the world-class breeding program established at the Melbourne Zoo has now been expanded to both Bristol Zoo in the UK and the San Diego Zoo in the US, so there is definitely international interest in this amazing true story.

Another title like Animal Eco-Warriors: Humans and Animals Working Together to Protect Our Planet includes stories from Australia, New Zealand, the US and even Mozambique, so there is certainly worldwide appeal. Plus the enjoyment, values, experiences and lessons from this book definitely aren’t restricted by geographical boundaries.

Early next year we are publishing a new book in our ‘Small Friends Books’ series (a collaborative series with Scale Free Network that includes stories that describe symbiotic partnerships between microbes and larger life forms) entitled The Squid, the Vibrio and the Moon. In this book the relationship illustrated is between the Hawaiian bobtail squid and the bioluminescent bacteria that help it glow in the moonlight. While the story is set in the shallow waters of Hawaii, bobtail squids can be found in both Australia and Indonesia, but moreover the science behind the story has universal appeal.