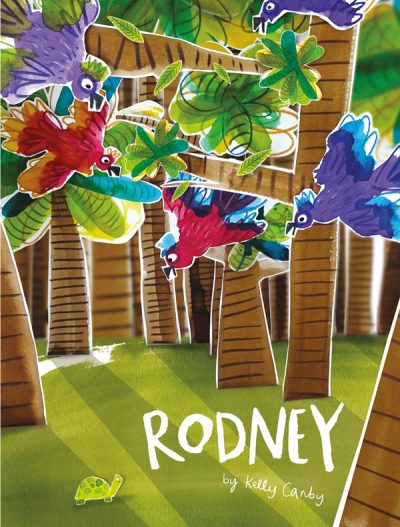 Fremantle Press specialises in books by new and emerging Western Australian writers and artists, and has a thriving children’s and YA list. CEO Jane Fraser spoke to Think Australian about the publisher’s recent rights successes and forthcoming titles. View the publisher’s latest rights catalogue here.

Which children’s and YA titles will you be promoting at Bologna and internationally this year?

Our picture books always do well, and we already have international offers for Kelly Canby’s next book Rodney (March) and Fiona Burrows’ picture book Violet and Nothing (May).

Rodney is the tale of a small tortoise with a big dream. Kelly hand-coloured and cut out each individual element then created a diorama, which she photographed and manipulated digitally. You feel a little like you’re wearing 3D glasses, which is perfect for entering Rodney’s world as he works out how define himself in relation to others and the world around him.

Violet and Nothing is the tale of a little girl with very big ideas. The illustrations are beautiful and distinctive and help unpack some very sophisticated concepts. Fiona uses black-and-white drawings offset by brilliant colour to illustrate Violet’s inner thoughts as she wrestles with the idea of nothingness.

We also think our two new adventure stories will appeal. I challenge you to find a 10-year-old who wouldn’t want to live with talking alpacas or own their very own pirate ship. Kathryn Lefroy’s debut novel Alex and the Alpacas Save the World (May) sends Alex, a feisty, adventurous and curious kid, off on a gripping and mystical adventure to save the planet.

Award-winning Norman Jorgensen is back with a rollicking tale of mischief on the high seas. The Wreckers’ Revenge (June) sees young Red Read expelled from school and whisked off by Captain Black Bowen, one of the most infamous smugglers to ever have plied the coasts of Australia and Asia.

Which titles have been the most successful in overseas markets in the past year?

The Hole Story by Kelly Canby was our international hit last year with sales to China, Korea, Italy, Spain and Catalonia, the Netherlands, and Belgium. It was great to see the Indigenous picture book I Love Me by Sally Morgan and Ambelin Kwaymullina get picked up by a big North American publisher, and really nice to see debut author Ian Mutch’s More and More and More getting signed up in Korea. Pandamonia is in its third printing in the US and selling well. We predicted Kyle Hughes-Odgers’ titles would do well too—and they did. One Thousand Trees and Can a Skeleton Have an X-ray? may be off to Korea soon.

In addition to the picture books, we had Saving Jazz by Kate McCaffrey and Dropping In by Geoff Havel translated into Slovenian, and sold the Spanish- and Catalan-language rights for Dungzilla by James Foley.

We can’t wait to release Antarctica by Moira Court (November). Moira has illustrated a number of picture books with Fremantle Press authors, including My Superhero with Chris Owen, which sold into China and France. This time Moira’s flying solo. Antarctica is in the news every day and this gorgeous picture book introduces the continent’s wildlife, topography and quirky facts to a new generation of readers in a cleverly constructed counting book. Moira’s distinctive illustrations are all created by hand using layered wood block prints, screen prints and collage. The result is stunning.

Helen Milroy is Australia’s first Indigenous doctor and is a child psychiatrist who uses her stories and artworks extensively with children. Her debut book Wombat, Mudlark and Other Stories (July) features her original artworks. From a fallen star to a lonely whale, and from an entertaining lizard to an enterprising penguin, each story explores the power of friendship and celebrates the wonder of the natural world. The themes will work in many cultures and contexts and Helen is an exciting writer to watch.