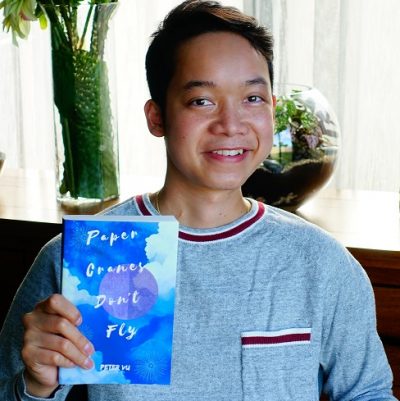 Paper Cranes Don’t Fly (Ford Street Publishing) tells the story of a cancer patient as he undergoes treatment with friends by his side. It’s the debut novel from Australian author Peter Vu, who was diagnosed with a brainstem glioma at age six and went through his final surgery during year 10. Earlier this month it won the teen-voted Gold Inky Award for Australian YA. Publisher Paul Collins spoke to Think Australian about the novel’s rights sales potential.

What is your pitch for Paper Cranes Don’t Fly?

Despite the ever-growing tumour in his head, Adam just wishes he was normal. This is until his latest operation, when everything seems like a lost hope, and he knows he isn’t normal. He doesn’t know what to do, because there is nothing he can do.  All he feels he has left are his friends. But that may be all he needs. Paper Cranes Don’t Fly describes the life of a cancer patient in a way that no other young adult book does, focusing not just on living with cancer, but the author going through it, with the help of patience, love and friendship.

What are some comparable titles in the market?

John Green’s The Fault in Our Stars and A J Betts’ Zac & Mia (Text Publishing).

How has Paper Cranes Don’t Fly been received in Australia?

Sales have been above average for a micro press. Magpies magazine said: ‘This is a poignant story that will stay in your heart and mind a long time.’ And this from Reading Time: ‘Beautifully and realistically written.’

Have any international rights been sold?

No international rights as yet.

Has there been any interest in film/TV adaptation?

A film company is currently reading the book.

Why do you think this novel will appeal to international readers?

There’s no location limitation on the universal themes of happiness, friendship, growth and the emotion and physical impact of chronic illness.

Paper Cranes Don’t Fly is a raw and honest YA novel written by a teenager who has lived most of his life in and out of hospitals.

This book won the Gold Inky Award, which was voted for by Australian teenagers, and I think teens worldwide will also empathise with a book written by one of their own.