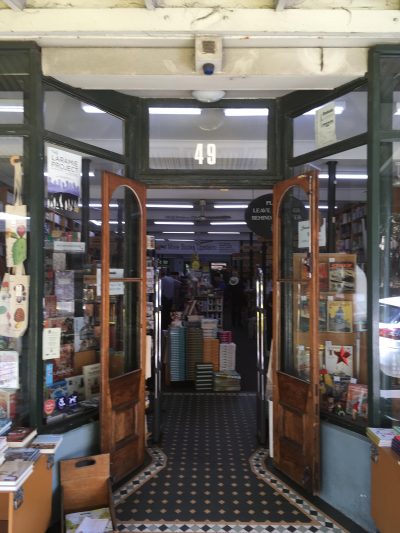 In the lead-up to Christmas, the busiest time of year on the bookselling calendar, Books+Publishing is asking booksellers across the country to predict their biggest sellers and ‘surprise sellers’.

In this final instalment for the year, Louise from Sydney’s Gleebooks shares her predictions for what will sell this Christmas season.

Sally Rooney’s Normal People (Faber) and Lisa Halliday’s Asymmetry (Granta) are flying off our shelves; both of them have distinctive voices from young writers, and our customers like that. Eleanor Oliphant is Completely Fine by Gail Honeyman (HarperCollins) is also popular, with its unsettling but very humorous narrator, and Michael Ondaatje’s haunting Warlight (Jonathan Cape) is also selling briskly. It helps that several of those books have been shortlisted, longlisted and won prizes, but it’s interesting to note that word of mouth is more important for consistent sales.

Nonfiction has always been a strong suit of Gleebooks’, and this year is no exception. Leigh Sales’ Any Ordinary Day (Hamish Hamilton) is both moving and inspiring, and selling hugely. Tara Westover’s riveting Educated (Windmill) has definitely caught the collective imagination, as has Behrouz Boochani’s sobering No Friend But the Mountains (Picador). All these books are compelling and eye opening.

Our children’s section is a treasure trove all year round, but it’s brimming at the moment. Davina Bell and Allison Colpoys’ beautiful, life affirming All the Ways to be Smart (Scribble) is hugely popular with adults and children—it’s a testament to play and imagination and will be a classic. Julia Donaldson and Sharon King-Chai’s Animalphabet (Pan Macmillan) is an original, fun interpretation of a well-worn theme (the alphabet), and it can be read from start to finish, and back again—very clever. And Jessica Townsend’s Wundersmith is proving to be as popular as Nevermoor (both Lothian), the first book in ‘The Calling of Morrigan Crow’ series.

We specialise in children’s classics, and we sell a lot of them. Charlotte’s Web by E B White and I Capture the Castle by Dodie Smith always sell well at this time of year; they’re books that we’d hope everyone would read at least once in their lifetime.

We all know that a nice cover and a famous chef will sell a cookery book, and the Yotam Ottolenghi books have all proved this. Ottolenghi Simple (Ebury) is a great book, with universal appeal (and a nice cover). Foundations of Flavour: The Noma Guide to Fermentation by Rene Redzepi and David Zilper (Workman Publishing) has proven surprisingly popular too, despite its niche subject matter.

Chromatopia: An Illustrated History of Colour by David Coles with photographs by Adrian Lander (Thames & Hudson), is a small and gorgeous hardcover that celebrates the world of colour with sumptuous photographs and accessible text. Delightful rather than didactic, it’s selling fast.

Selections from the specialist section

Gleebooks has a very strong leaning to history, politics and philosophy. At this time of year we sell a lot of books on Australian history: The Enigmatic Mr Deakin by Judith Brett (Text), and John Curtin’s War by John Edwards (Viking) are both big sellers. Political nonfiction is also strong: Michael Lewis’ The Fifth Risk (Allen Lane) is a big seller, as well as Anne Summers’ Unfettered and Alive (A&U), and Gillian Triggs’ Speaking Up (MUP).

Lots of memoirs with head shots on the cover, books about going green, and still a preponderance of really large, smartly designed, nonfiction books for children that adults love to buy.

At your service: Nic Bottomley on creative bookselling

Under the covers: Tegan Bennett Daylight on ‘The Details’

US Independent booksellers rally together via Bookshop.org