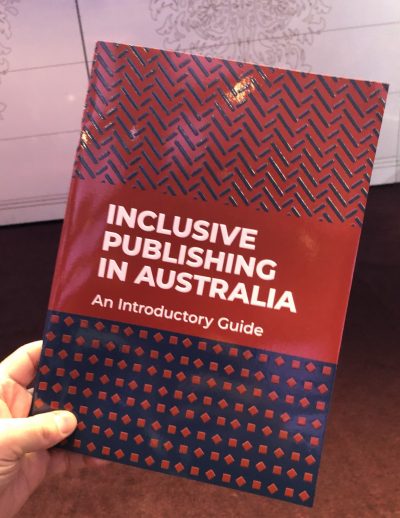 More than 300 delegates attended this year’s National Editors Conference in Melbourne in May, under the theme ‘Beyond the page’.

IPEd CEO Karen Lee said the conference was well received. ‘There’s a lot of goodwill between editors, and when editors get together there’s a lot of sharing and networking. Opportunities like this are really important for our members.’

For love and money

Editor Pamela Hewitt spoke about editors’ income in the ‘For love and money’ session. Referencing Books+Publishing’s employment survey, Hewitt said, ‘A sober fact is, over the last couple of decades, editorial salaries and freelance rates have declined in real terms’. Hewitt began running her own survey in 2001 to coincide with the IPEd conference, with 14 questions ‘covering everything from education to experience’. The survey found that the hourly rate for freelance editors rose from $49 in 2001 to $67 in 2016, but using the Reserve Bank of Australia’s inflation calculator, the rate should have risen to $74.

Hewitt said editing ‘on the side’ is not enough if you expect to make a living wage and set money aside for retirement. She explained that women live, on average, five years longer than men, retire with 47% less superannuation than men, and receive one third of the government tax concessions on superannuation. She recommended building savings early, choosing a super fund wisely and asking for professional advice.

Hewitt also offered a number of strategies for setting pay rates. She told conference attendees that they shouldn’t ask what the client can afford, but should ‘stand proud and charge what you’re worth’. She recommended charging more than the average: ‘After all, you’re not average’. Hewitt also encouraged attendees to invest in themselves by paying for education and professional development, association membership, books and publications, because these will be ‘an investment in yourself and your industry’ and they are tax deductible.

Author, editor and member of the Media, Entertainment and Arts Alliance (MEAA) Marisa Wikramanayake ran a session about working rights and conditions for freelance and in-house editors. She explained that, in order to collectively bargain, the majority of the workers in the workplace must agree to unionise before Fair Work will enter into the bargaining process. Wikramanayake noted that many publishers are not adhering to the Book Award by not paying overtime, adding that if an employer is not adhering to the law employees can report them. Freelance editors haven’t traditionally been able to access as many of the same rights as in-house staff, said Wikramanayake, because they aren’t allowed to collectively bargain under the current Fair Work legislation. However MEAA has found that freelancers all experience the same issues, so it has created a national freelance committee to advocate for the rights of freelancers.

When to care and when not to care

In her keynote address, Macquarie Dictionary former editor Susan Butler discussed ‘when to care and when not to care’ when editing, exploring the words that editors are prepared to accept with language change and those where they will stand ground. Butler decried the incorrect use of the word ‘literally’, for instance, but admits she can’t fight it becoming a word of emphasis in common usage.

RMIT lecturers and novelists Rose Michael and Michelle Aung Thin used extracts from their own writing to demonstrate how ‘micro’ line-editing reveals the ‘macro’ effect of structural and developmental editing. Michael shared before and after passages to show line changes related to perspective and point of view, adding that expression and metaphor are the touchstones that reveal narrative. Aung Thin discussed the political considerations that writers, editors and sensitivity readers need to work around; for instance, choosing to use the name ‘Myanmar’ or ‘Burma’ contains complex political connotations.

Echo publisher Angela Meyer presented a research paper on the writer–editor figure, discussing how ‘elements of a personal writing practice enhance developmental editing work’. She surveyed a number of writers—published and unpublished—who were also working as editors, and explored how elements of their writing practice can be incorporated into their work with authors. Of particular note was the writer–editor’s approach to developmental stages of manuscripts, including acquiring, relationship building and structural editing. The writer–editors surveyed by Meyer developed a ‘writerly identity’, which can enhance the conversation between editor and writer, as well as having a positive effect on the developmental editing process.

Debunking myths and minding the market

Small Press Network chair Michael Webster presented a review of book sales in Australia in 2018, concluding that the Australian market is currently healthy. Webster noted that while annual sales peaks are always the same every year (around Mother’s Day, Father’s Day and Christmas), the market is fragmenting more and more by channel—even cover design trends are being influenced by which channel a book is aimed at. Webster also observed that ‘the hardback is back’, with 28% of books sold in Australia last year being hardbacks.

Australian Copyright Council CEO Grant McAvaney gave a very entertaining presentation on copyright for editorial gatekeepers, and debunked a few common myths about copyright. ‘Copyright protects things that would otherwise have no legal protection at all,’ noted McAvaney, who offered this advice to editors: ‘If nothing else remember this: Have very firmly in your head what is considered “works” and what’s considered “subject matter other than works” under the copyright act.’ He also noted that there is often confusion about the difference between owning the copyright and having a license to use the work, however copyright protections are always trumped by contracts, which most authors will have signed.

Doing it with style (guides)

Penny Modra, editorial director at Melbourne-based writing school and consultancy The Good Copy, gave an enthusiastic and highly enjoyable keynote to close the conference. Most of The Good Copy’s business, Modra said, comes from training organisations, including advertising and branding companies, PR agencies and even banks. ‘Writing in most people’s jobs is an assumed skill,’ she said, noting that many people experience imposter syndrome when it comes to grammar due to the fact that nuts-and-bolts grammar was taken off the Australian syllabus in the 1970s.

Modra said that brands are now spending a lot of time, effort and money on social media, particularly on Facebook advertising. And while these brands think that they only need a company like The Good Copy to help them create a style guide, what they really need are things like audience advocacy, training, systems, arbitration and empowerment, alongside a useful style guide that people will actually use. ‘The really important part is buy-in from the whole team, not just the people in charge,’ said Modra. ‘If people have been involved in the process from the beginning they’ll actually use the style guide.’ Another tip on developing style guides was the importance of examples: ‘Having good examples in a style guide is huge. Most people will just copy an example,’ said Modra. She also won over every editor in the room when she asserted that ‘editors are better reader advocates than marketers are—editors can bring proper reader advocacy that’s neutral’.

This year’s conference also saw the launch of a new medal recognising distinguished service to IPEd and the profession of editing, named in honour of founding member of Editors Victoria Janet Mackenzie, as well as the launch of a guide to inclusion and accessibility in the publishing process, which came out of IPEd’s partnership with the Australian Publishers Association (APA) on the Australian Inclusive Publishing Initiative (AIPI). Also discussed was IPEd’s inaugural ambassadors program, a two-year pilot project designed to ‘enhance the editing profession and educate industry about the role of editors in the publishing process’, while Julia Carlomagno was awarded the 2019 Rosanne Fitzgibbon Editorial Award, known as the ‘Rosie’, for her work on Adult Fantasy (Briohny Doyle, Scribe).