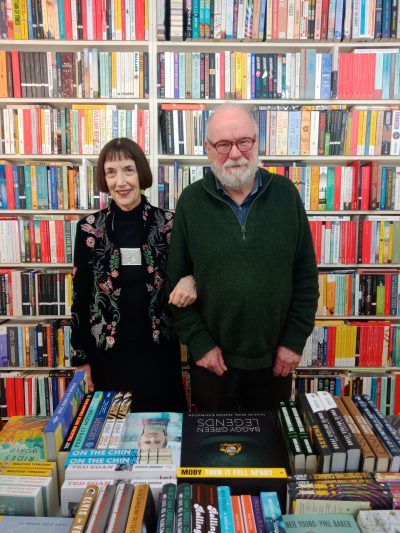 Owners of The Hobart Bookshop to retire

The owners of The Hobart Bookshop, Christopher Pearce and Janet Grecian, have decided to retire after almost 30 years of owning the business.

In the early 1970s, after graduating with an arts degree and trying out a job as a librarian—‘It didn’t suit me much’—Pearce started helping out at his father’s bookshop, Fullers, before a year-long stint at Sydney independent bookshop Abbey’s. After moving back to Tasmania, he started working at Fullers full-time until the shop was sold in 1981.

After a period of time living and working in Port Moresby managing The Papua New Guinea Bookshop in the 1980s, Pearce and Grecian opened The Hobart Bookshop in 1990. The shop moved to its current premises at Salamanca Square in 2000, where it continues to sell a mix of new and secondhand books.

One of many highlights for Pearce was an event with Paul Jennings in the mid-2000s. According to Pearce, ‘On the way down to the shop, Paul said, “I don’t think I’m as popular as I used to be.” We walked into the square and looked at the shop and there was a line—about 500 kids coming out of the shop, right into Salamanca Square and onto Salamanca Place. He spent three hours signing books and talking to every one of them. It was just amazing.’

Publishers have changed for the better over the years, said Pearce, from becoming more flexible with their terms of sale to deploying helpful reps. ‘The good reps are really onto things now. They’re very professional and they build relationships, they suggest things you might try and they’re usually right.’ Leading Edge has also been a help. ‘We can now compete with nearly everyone. It’s a good deal.’ He added, ‘Still, the Big Ws, well, they get too good a deal.’

‘When publishers made everything sale-or-return it meant places like Kmart and Big W could then get into bookselling. They have been the biggest problem, I think,’ added Pearce. Despite this challenge though, his outlook is optimistic: ‘Always be nice to publishers and they’ll be nice to you.’

‘We all dreaded the DDSs taking over but it didn’t really have that much effect,’ he said, adding that ebooks were also a worry, ‘but that never happened, really.’ Having to start competing with Book Depository and its low freight charges was the most significant change Pearce observed over the years, but he noted that Book Depository’s prices appear to have gone up in the last year or so.

Pearce is hopeful about the future of bricks-and-mortar retail. ‘Community bookshops are always going to be good,’ he said. ‘I think that’s where Angus & Robertson and Borders made their mistake—they were big but they were so impersonal. Book people tend to want to talk to you, even if it’s about their marriage breakups—booksellers are like confessors! They tell you all sorts of things.’

His advice for independent booksellers? ‘Treat your customers like gold. When you give customer service they treat you well,’ he said, adding that The Hobart Bookshop goes the extra mile to help customers, often looking for secondhand books for them.

Of his nearly 50 years in bookselling, Pearce summarised: ‘I had a good time, met a lot of interesting people. It’s not the easiest industry to make money in, but it’s fun.’ When asked what his future plans are, Pearce said, ‘Read a lot of books!’

‘You tend to get a bit funny in your reading,’ he said of owning a bookshop. ‘You tend to read stuff that you think you’ll be able to sell to customers and you ignore the books you really want to read.’ Yet old bookselling habits die hard: Pearce and Grecian still have about 50 proofs at home that they’re planning on getting through.

For more information about the sale of The Hobart Bookshop, see the classified here.