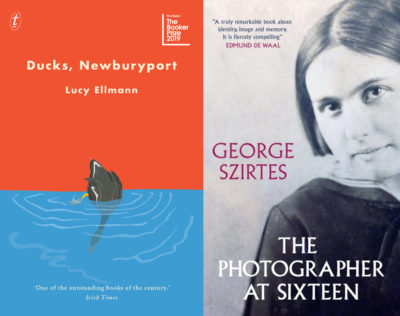 In the UK, Lucy Ellmann and George Szirtes have won the James Tait Black prizes for fiction and biography respectively.

Ellmann won the fiction prize for her novel Ducks, Newburyport (Text), which fiction judge Ben Bateman described as ‘the novel of our maddening moment’. Ducks, Newburyport was previously awarded the Goldsmiths Prize and was shortlisted for the Booker Prize.

Szirtes won the biography category for The Photographer at Sixteen: The death and life of a fighter (MacLehose Press), which tells the story of his mother Magda, who committed suicide in 1975. Biography judge Simon Cooke said: ‘George Szirtes’ reverse chronological portrait of the woman who was his mother is a piercingly beautiful memoir-as-prose-poem, as generous as it is scrupulous in its searching meditation on a death and life, on memory and history, and on how we imagine the lives of those we love.’

Founded in 1919, the James Tait Black Prizes are awarded annually by the University of Edinburgh and are judged by postgraduate students and senior academics at the university. Each winning author receives £10,000 (A$18,000).