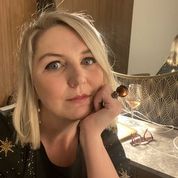 Compulsion centres on Lucy, a woman in her early twenties, who bows out at the height of a promising career in the music industry to retreat to a remote seaside town. ‘Before long she has assembled a small cast to recreate her old life in hothouse miniature, full of claustrophobic entanglements and pill-blasted afternoons. Across endless dinners and benders, the group attempt to out-perform each other, their devotion to pleasure frequently tipping into self-immolation.’

Scott, who began her career as a music journalist at age 18 and was editor of street press magazine Rave at 22, before spending a decade in the performing arts, said that ‘what started as a short story for Voiceworks in 2003 has alternately grown and contracted ever since to accommodate whatever obsessions dominated my life: music and my early experiences working in the music industry, excess in pursuit of transcendence, burnt-out prodigies, sex, bucolic yearning, obsessive friendships, obsessive mixtapes, obsessive love, obsessive habits’.

‘After #metoo exploded in 2017, I realised I’d been using the writing to process ideas around power, consent and the mutability of sexual identity, hindsight being the upshot of sitting with Compulsion for so long.’

PRH publisher Meredith Curnow said: ‘I had many other things lined up to do the day I picked up this manuscript, and I now don’t even recall what they were. Despite having almost no knowledge of early electronic music, the locus of many of the discussions of Compulsion, I was compelled and affected by and loved every page of this manuscript. I had the same feelings as when I first read The Secret History.

PRH publishing director Justin Ractliffe called Scott’s debut ‘exhilaratingly decadent’. ‘Her angelheaded hipsters chase their bad desires through the rhythm of the night—their passion burning, their love so strong. She perfectly captures the transporting sensations of desire and hunger for experience. And it’s all set to glorious synth washes and head-drilling beats—her love for music suffuses the prose. Reach out and touch faith with Compulsion. I know I did.’

Oldfield said reading Compulsion ‘sparked a triumphant both hands in the air jump’ and thanked PRH for ‘going all out’ to acquire it. ‘It’s notoriously hard to write elegantly about twenty somethings, sex, drugs, music and love, but Kate Scott has done it,’ said Oldfield. Get an invite to the launch party any way you can.’

Compulsion will be published in early 2023.