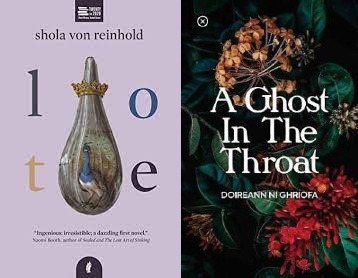 In the UK, Shola Von Reinhold and Doireann Ní Ghríofa have won the James Tait Black prizes for fiction and biography respectively, reports the Bookseller.

Von Reinhold won the fiction prize for their debut novel Lote (Jacaranda), which follows the narrator Mathilda’s fixation with the forgotten Black Scottish modernist poet Hermia Druitt, a bohemian socialite of the 1920s. Fiction judge Benjamin Bateman described Lote as ‘an imaginative tour de force that combines a gripping detective plot with a thoughtful meditation on the historical neglect of Black queer and women artists’.

Ní Ghríofa—a poet and essayist—won for her prose debut A Ghost in the Throat (Tramp Press). Biography judge Simon Cooke called the book ‘a work of great and searching depth and generosity—as involving as it is luminous—that weaves poetry, memoir, biography and translation into a powerful celebration of female texts and a profound exploration of the way the voice and life of one poet echoes in the life and voice of another’.

Founded in 1919, the James Tait Black Prizes are awarded annually by the University of Edinburgh and are judged by postgraduate students and senior academics at the university. Each winning author receives £10,000 (A$18,000).

The winners of last year’s prizes were Lucy Ellmann’s novel Ducks, Newburyport (Text) and George Szitres’s The Photographer at Sixteen: The death and life of a fighter (MacLehose Press).