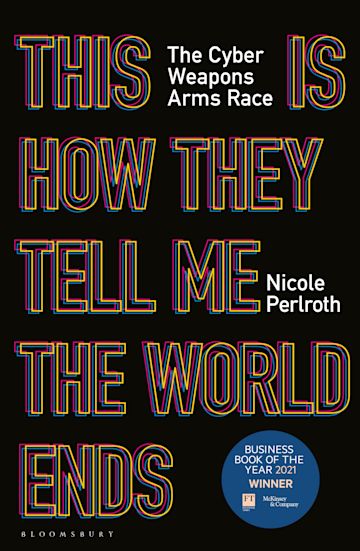 In the UK, This Is How They Tell Me the World Ends: The cyber weapons arms race (Nicole Perlroth, Bloomsbury) has won the 2021 Financial Times and McKinsey Book of the Year Award.

The judges described Perlroth’s investigation of the cyber weapons arms race as ‘sobering’, with chair of judges and Financial Times editor Roula Khalaf noting, ‘Cyber security isn’t featuring highly enough on CEOs’ agenda. I hope this award will prompt them to read this book and pay attention.’

The award recognises a work that provides the ‘most compelling and enjoyable insight into modern business issues’. Perlroth’s book was chosen for the £30,000 (A$56,400) award from a shortlist of six announced in September. Each shortlisted author receives £10,000 (A$18,800).

Patrick Radden Keefe has since announced he will donate the £10,000 prize he was awarded for the shortlisting of his book Empire of Pain: The secret history of the Sackler dynasty (Picador), due to prize sponsor McKinsey’s role advising the Sackler family on opioid sales.

Keefe’s book examines the opioid addiction crisis, focusing on the role of the Sackler family. Keefe tweeted that he would donate the prize to Odyssey House in New York, which ‘helps New Yorkers in need overcome drug and alcohol abuse, improve their physical and mental health, and defeat homelessness’.

As reported by the Bookseller, Keefe stated that he was not suggesting the book ‘was somehow torpedoed by McKinsey’.

‘That the book was even shortlisted speaks, I suspect, to the independence of the jury. I’m loathe to be ungracious and am genuinely grateful to them. It may also signal a change of heart by McKinsey. I hope so,’ he said. ‘I think it lost on the merits, and that the jury was 100% independent.’

In February, McKinsey agreed to pay nearly $600 million in settlement for its role in the opioid crisis.