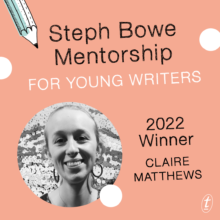 Text is delighted to announce that Claire Matthews has been selected as the recipient of the 2022 Steph Bowe Mentorship for Young Writers.

The mentorship was established in memory of Steph Bowe’s longstanding commitment to fostering and mentoring young writers. It’s designed to encourage an exciting new writer in Australian children’s literature under the age of 25. It is awarded to the Text Prize entrant the judging panel believes would receive the most benefit from the mentorship.

Claire will be paired with an established author for a 20-hour mentorship to develop her manuscript ‘Between the Water and the Sand’, an atmospheric YA coming-of-age story about four teenagers who take on the impossible task of building a train line through regional Queensland.

The mentorship is an initiative from Text Publishing delivered in partnership with LoveOzYA. It is supported by Express Media and the National Writers’ Centre Network. It began in 2021 and will run for three years.

Entries for the 2023 Text Prize and Steph Bowe Mentorship for Young Writers will open in early 2023.

The 2022 Tasmanian Literary Awards are now open for entry Classifieds