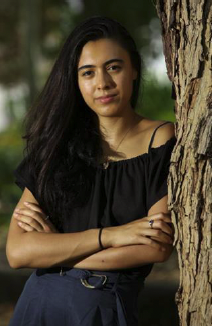 Dirt Poor Islanders explores growing up in a blended Tongan family in Western Sydney and the challenge of finding a way to be true to yourself and your roots without ignoring your past or denying your future. ‘[Dunn’s] unique writing craft powerfully mirrors the story as she blends ancient Pacific oral storytelling traditions, such as talanoa, with modern Western Sydney vernacular,’ said the publisher of the ‘insightful and provocative’ novel.

‘I am humbled and honoured to be working with Hachette Australia on my debut novel,’ said Dunn. ‘To be able to reveal a unique and complicated experience of being Tongan in Australia is a responsibility I take very seriously, especially considering how the Pasifika community is continuously overlooked and stereotyped.’

Hachette head of literary Vanessa Radnidge said: ‘This is powerful autobiographical fiction that gives insight into being a Tongan and Australian woman in a white-dominated culture and learning to find your own voice when tradition, culture and poverty work against you being your authentic self. It will show that racism can be addressed when we acknowledge our shared humanity but the struggles and fractures of growing up between two cultures are not easily navigated.’

Dunn is a writer, editor and the general manager of Sweatshop Literacy Movement. Her work has been published in the Sydney Review of Books, Meanjin, SBS Voices, the Guardian, Huffington Post, and Cordite, and she has also edited several anthologies, including Another Australia, published in June by Affirm Press.

Dirt Poor Islanders will be published in paperback, ebook and audio in 2023.