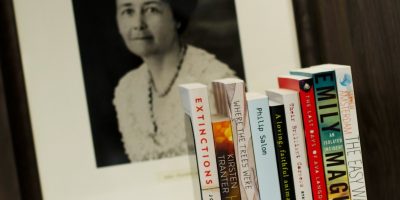 Here’s what our reviewers thought of the books:

‘Steven Amsterdam’s previous books Things We Didn’t See Coming and What the Family Needed are heavy with apocalyptic vision and metaphor, so his latest novel will immediately strike his fans as comparatively realist,’ writes reviewer Portia Lindsay. ‘In The Easy Way Out, Amsterdam applies this exploration of extremes and use of metaphor to the subject of dying and its attendant complications.’ The novel centres on Evan, a nurse who assists terminally ill patients to end their life, while his mother Viv suffers from the late stages of degenerative illness. ‘Though the story moves towards a seemingly inevitable intersection between Evan’s personal and professional lives, it manages to surprise,’ writes Lindsay. ‘There is plenty to mull over in this challenging and topical story by a talented and thoughtful writer.’

‘There has been a proliferation of pretty-dead-girl thrillers in the past few years and it shows no sign of letting up. But don’t let the trend fool you into thinking they’re all cut from the same cloth; this one is distinctly better than most,’ writes reviewer Hilary Simmons. An Isolated Incident follows the brutal murder of a woman in a small town, with the narrative split between the victim’s sister and an out-of-town journalist who arrives to report on the crime. ‘The first half of An Isolated Incident races along at breakneck speed, setting the scene for a big reveal. But—and this isn’t a spoiler—there isn’t a dramatic twist or a neat ending. And perhaps that’s the point: that there are no monsters, only men; and even the most isolated incidents have roots in everyday violence.’

‘The Last Days of Ava Langdon may be a novel, but it is also a perfectly judged poetic work,’ writes reviewer Angela Andrewes. ‘O’Flynn takes us into the mind of the enigmatic Australian writer Eva Langley, although he doesn’t presume to provide us with a factual account. Ava Langdon, as he calls her, is a genius and a recluse, a poet and a novelist, and an old woman.’ Andrewes describes O’Flynn’s portrait of Langley/Langdon as ‘deeply moving’. ‘It asks us to think about who we want to be and who we will be when we are old, and who will be there at the end.’

‘We don’t see much formally innovative, experimental writing in Australian fiction—realist narratives tend to rule the roost. Also rare is genuinely fine comic writing,’ writes reviewer Martin Shaw. ‘Enter then Ryan O’Neill, who, with his latest book Their Brilliant Careers, combines both modes in a hilarious alternate history of Australian letters.’ O’Neill’s novel includes such characters as an Australian Nobel Prize winner for Literature pre-dating Patrick White who was ‘quickly forgotten on account of her being a woman’ and ‘one of Australia’s most revered woman authors’ who ‘was in fact largely rewritten by her dastardly editor husband!’ ‘A more colourful and cutting account of the writing game in Australia, containing many a truth about its literary culture, is unlikely to be produced any time soon,’ writes Shaw.

Josephine Rowe’s first novel A Loving, Faithful Animal—following two story collections—‘distils the small incidents of ordinary life into moments of resonance and grace, but assuredly weaves them together across the longer form’, writes reviewer Veronica Sullivan. The novel centres Jack, a Vietnam vet haunted by his experience of war, and his family. ‘As she shifts through the voices of each family member, Rowe allows their individual stories to unspool over the years, revealing the lifelong impact of Jack’s violence and the ways in which war makes monsters of men’. Sullivan adds: ‘Frank depictions of domestic violence and its capacity for damage make for difficult reading, but Rowe’s lyrical writing—which is almost prose-poetry at times—is utterly compelling.’

‘Award-winning poet Philip Salom’s third novel, set in inner-city Melbourne, is an absurdist fiction following the haphazard lives of oddball couple Big and Little. Big is a large, Rabelaisian, somewhat gruff 60-year-old cross-dresser partial to fright wigs and loud dresses. Little, his partner, is a diminutive woman in her mid-30s,’ writes reviewer Chris Saliba. ‘As the title intimates, Salom’s novel is a Waiting for Godot of the inner-city—an existential comedy of urban survival. Written in a style that surges and foams with endless wordplay and invention, Waiting has warmth and humour. It will appeal to readers who like gritty realism, but also appreciate a postmodern style brimming with irony and literary references.’

Where the Trees Were (Inga Simpson, Hachette)

‘Inga Simpson’s third novel is a moving meditation on the bonds of childhood friendship and the moral complications of atonement,’ writes reviewer Carody Culver. The story alternates between the past, when a younger Jay and her friends discover an Aboriginal burial site on her family’s property; and the present, when Jay, now working as a museum conservator, has the opportunity to make amends. ‘This is a poignant and page-turning story that touches on important themes of cultural appropriation and the lasting emotional repercussions of innocent childhood acts,’ writes Culver.

‘Hold is Kirsten Tranter’s third novel and like her second, A Common Loss, it deals with the grief of unexpectedly losing a loved one and the strange places that grief can take us,’ writes reviewer Portia Lindsay. The book follows Shelley, whose partner died in a surfing accident three years ago, as she moves into a terrace house with her new partner and discovers a hidden room. ‘Striking gothic imagery collides with the glitz of Sydney’s wealthy beach suburbs in this enchanting narrative,’ writes Lindsay.

Josephine Wilson was named the recipient of the inaugural Dorothy Hewett Award for her manuscript ‘Extinctions’, which centres on Frederick, a retired engineer in his sixties, who ‘has moved into an up-scale retirement village and is reflecting on his life, having resigned himself to a gradual crawl towards death’. ‘Life has other plans for him though, and this slow-burn narrative delves into “it’s never too late” territory in a subtle and complex manner,’ writes reviewer Portia Lindsay. ‘Peppered with clever observations, the writing is sharp and the interactions in Extinctions are complex, building a rewarding narrative about being lost but ultimately getting found.’