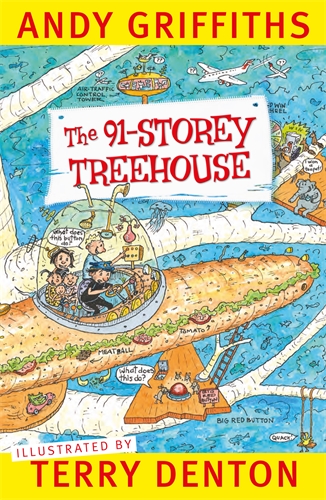 It’s impossible to overstate the success of the ‘Treehouse’ junior-fiction series by Andy Griffiths and Terry Denton. The series launched in Australia in 2011 with The 13-Storey Treehouse and will shortly release its seventh instalment, The 91-Storey Treehouse (Pan). It has regularly topped the Australian bestseller charts, broken retailers’ records for first-day sales, won numerous book awards, been adapted for stage, and even inspired a Guinness World Record for the Largest Gathering of People Dressed as Trees. Think Australian spoke to the creators’ agent Curtis Brown:

How would you describe the ‘Treehouse’ series to an international audience?

A series of adventures in Andy and Terry’s treehouse, the most amazing treehouse in the world! What are you waiting for? Come on up!

How many copies of the ‘Treehouse’ series have been sold in Australia?

The ‘Treehouse’ series has sold over three million copies in Australia. The previous title in the series, The 78-Storey Treehouse, is the number one fastest selling Australian book of all time, knocking off its predecessor The 65-Storey Treehouse on release.

Why do you think the ‘Treehouse’ series has struck such a chord with kids?

Andy and Terry are characters in their own adult-free world, and their adventures have the extraordinary imagination and zany creativity of children. Their books are hilarious, creative, energetic, and kids just love coming along for the ride.

Which countries has the series been sold into?

How has the series been received overseas?

The series has been phenomenally well received overseas, with sales now over seven million copies worldwide, and Andy conducting extensive global author tours in dozens of countries—including conducting author events with Jeff Kinney, author of the ‘Wimpy Kid’ series, in the US.

Are there any jokes in the series that have been difficult to translate for other markets?

In Just Disgusting! [from the authors’ previous ‘Just!’ series], Andy tells Terry the most offensive word in the world, written as @#$%$#@. This proved very difficult for the audiobook narrator, who wasn’t sure what to say that would be suitable!

Are there any TV or movie adaptations in the works?

The ‘Just!’ series was adapted into a cartoon series called What’s With Andy?. There are no film or television adaptations currently underway for the ‘Treehouse’ series, with Andy and Terry instead allowing the material to be adapted into the hugely successful stage adaptations until the time is right for film.

What’s next for the authors?

As always, Andy and Terry are busy building more layers on their treehouse!