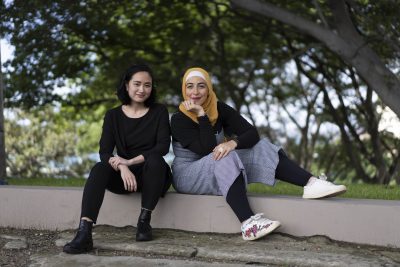 Vietnamese-Australian writer Shirley Le and Palestinian-Australian poet Sara Saleh, of Western Sydney-based literacy collective Sweatshop, have been announced as the inaugural recipients of a new mentorship for Sweatshop writers, run in conjunction with Affirm Press.

Over the next 12 months, Le and Saleh will work with Affirm Press to develop their debuts. Le will be writing autobiographical fiction focusing on a young second-generation Vietnamese-Australian woman from Western Sydney who comes of age, while Saleh will draw upon her own identity as an Arab-Australian Muslim woman who wears the hijab, to inform her body of work.

The mentorship includes up to two years of editorial support and feedback on a manuscript, and advice on building a writing profile. Affirm Press will retain the first publishing option for both manuscripts.

‘This is a unique opportunity for two of Western Sydney’s most exciting new writers to work with one of Australia’s best publishers,’ said Ahmad. ‘The mentorship will result in two new novels which reflect the incredible diversity of contemporary Australian culture.’

Le and Saleh said in a joint statement: ‘Thank you to Sweatshop and Affirm Press for such a wonderful opportunity. We are ready to get started. As women of colour from Western Sydney, we have plenty to contribute to Australian writing. It’s time for the shelves in our libraries and bookstores to include more voices from culturally and linguistically diverse communities.’

Affirm Press publishing director Martin Hughes said of this new partnership with Sweatshop: ‘We are committed to nurturing new talent and promoting greater diversity across our publishing list, and we could hardly be more excited about teaming up with an organisation as dynamic and direct as Sweatshop. Shirley and Sara are exceptional young writers and we can’t wait to collaborate with them on the first two books in this splendid initiative.’