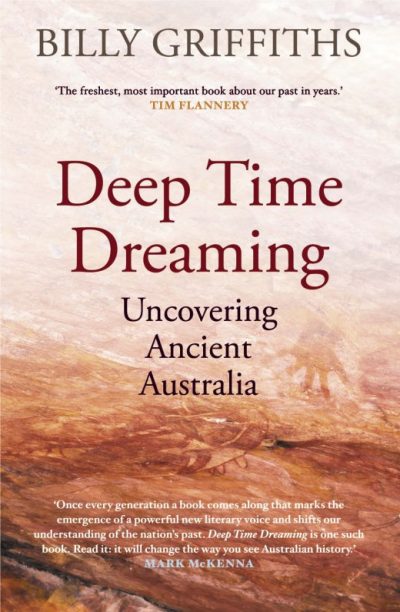 The winners of the 2019 NSW Premier’s Literary Awards were presented at a ceremony at the State Library of NSW on 29 April.

Deep Time Dreaming: Uncovering Ancient Australia, by writer and historian Billy Griffiths (Black Inc.), was awarded the $10,000 Book of the Year prize. Griffiths’ history of Australian archaeology investigates the ‘twin revolutions’ of ‘the reassertion of Aboriginal identity in the second half of the twentieth century, and the uncovering of the traces of ancient Australia’. Griffiths’ book was also jointly awarded the $40,000 Douglas Stewart Prize for nonfiction, alongside Sarah Krasnostein’s The Trauma Cleaner: One Woman’s Extraordinary Life in Death, Decay and Disaster (Text).

Judges said Deep Time Dreaming ‘fills a critical gap in our understanding of Australia’. ‘This beautifully written book is ultimately a revelation, showing that the influence of archaeology on the Australian consciousness has been far greater than anyone could have guessed.’

Accepting the award, Griffiths said: ‘I wanted to write this book to help change the conversation that we’ve been having about Australian history—to deepen our understanding of the history of this continent’.

Trent Dalton’s Boy Swallow Universe (Fourth Estate) also received multiple awards, including the $5000 Glenda Adams Award for New Writing and the People’s Choice Award, while a special award of $10,000 was made to Manus Island refugee Behrouz Boochani for his book No Friend but the Mountains: Writing from Manus Prison (Picador). Boochani’s book was ineligible for the NSW Premier’s Literary Awards, which require authors to be Australian citizens. The book won the top prize at the Victorian Premier’s Literary Awards in January this year, after an exception was made to the eligibility requirements.

Poet Les Murray, who died on Monday aged 80, was also honoured at the awards ceremony. A two-time winner of the NSW Premier’s Award for poetry, Murray was described by State Librarian John Vallance as ‘one of the greatest poets ever to have written in English’.

Senior judge Suzanne Leal said, ‘this year’s winning entries are rigorous in their interrogation of our past and consideration of our present. Curiosity and warmth, humour spanning from the gentle to the caustic, and clarity of thought and vision stand out in these exceptional works.’

The winners were chosen from shortlists announced in February. A total of $305,000 in prize money was awarded across 13 categories. For more information, see the State Library of NSW website.