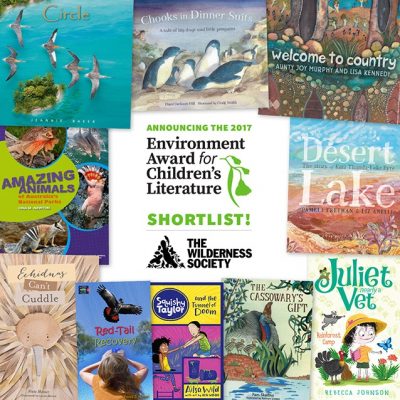 The Australian Wilderness Society has announced the shortlists for the Environment Award for Children’s Literature, which are presented annually to books that ‘foster a love of wild places and wildlife’ and ‘encourage a sense of responsibility for our natural world’.  Shortlisted in the picture book category are: Circle (Jeannie Baker, Walker Books); Chooks in Dinner Suits (Diane Jackson Hill & Craig Smith, Museum Victoria Publishing); and The Cassowary’s Gift (Pam Skadins & Kathryn Lovejoy) and Echidnas Can’t Cuddle (Nieta Manser & Lauren Merrick) from Little Steps Publishing. Shortlists were also announced in the children’s nonfiction and fiction categories.

The shortlists for the Speech Pathology Australia Book of the Year Awards have also been announced. They aim to ‘promote quality Australian books that help children get the best, most literate start in life’, and are judged on their ‘appeal to children, interactive quality and ability to assist speech pathologists and parents in communication and literacy development’.

Australian independent bookshop Readings—which won the inaugural Bookstore of the Year Award at the London Book Fair—has released the shortlist for its YA Prize. The winner of its Children’s Book Prize—Karen Foxlee’s middle-grade fantasy-quest novel A Most Magical Girl (Piccadilly)—was announced earlier in the year.

Small Things by the late author Mel Tregonning (Allen & Unwin)—a wordless graphic novel about ‘a boy who feels alone with his worries, but who learns that help is always close by’—has won the Gold Ledger Award for excellence in Australian comics and graphic novels. Small Things is also shortlisted for the Children’s Book Council of Australia’s Crichton Award for New Illustrators.