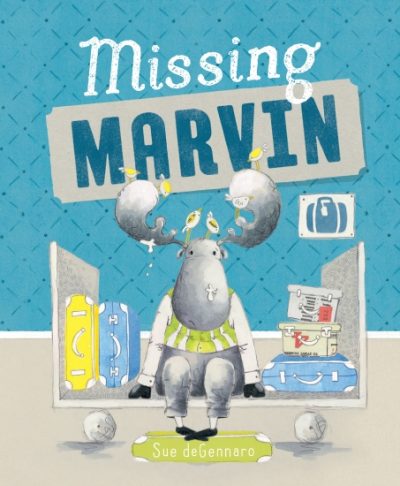 Sue deGennaro’s picture book Missing Marvin (Scholastic) has won the Children’s Peace Literature Award, presented to a book that ‘encourages the peaceful resolution of conflict’ or ‘promotes peace at the global, local or interpersonal level’. Missing Marvin was described by the judges as a funny and gentle picture book showing how to address bullying and conflict in a peaceful way.

The picture book Message in a Sock (Kaye Baillie, illus by Narelda Joy, MidnightSun) has won a Northern Lights Book Award for children’s books that ‘excel in aesthetic and literary qualities with an emphasis on permanency’. Awarded in the historical category, Message in a Sock is based on a true exchange between Lance Corporal A McDougall and a young girl who, with her mother, knits socks for soldiers during World War I.

Gabrielle Reid’s YA novel The Things We Can’t Undo (Ford Street) has won the Australian Association of Family Therapists’ Award for Children’s Literature. The novel follows the relationship between teen protagonists, exploring themes of consent, mental health and social pressures.

Steven Herrick’s YA novel By the River (Allen & Unwin)—which tells the story of a young boy growing up in a small country town—has won Germany’s Youth Literature Prize in the young adult division after German rights to the 2004 novel were sold in 2017.

A number of Australian authors and illustrators have been nominated for the Carnegie and Kate Greenaway medals. Karen Foxlee (Lenny’s Book of Everything, Allen & Unwin), Paul Jennings (A Different Land, illus by Geoff Kelly, Allen & Unwin) and Bren MacDibble (The Dog Runner, Allen & Unwin) have been nominated for the Carnegie Medal for an outstanding book for children and young people; and Grahame Baker Smith (Wisp: A Story of Hope, written by Zana Fraillon, Lothian), Remy Lai (Pie in the Sky, Walker Books) and Shaun Tan (Tales from the Inner City, Allen & Unwin) are in the running for the Kate Greenaway Medal for distinguished illustration.

Twelve Australian authors, illustrators and organisations have been selected as candidates for the Astrid Lindgren Memorial Award for children’s literature, and six Australian children’s books have been included in the White Ravens list for international children’s and youth literature.