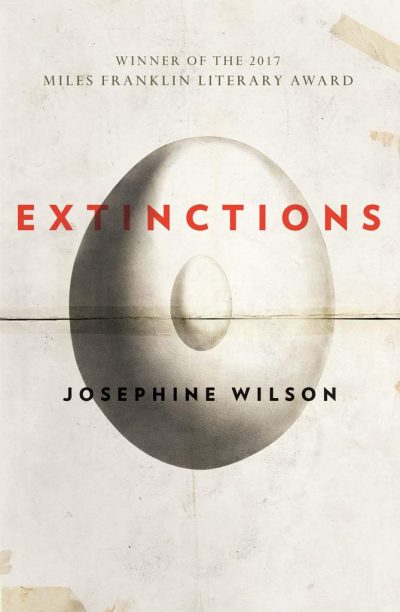 Wilson was named as the winner at an event at the State Library of NSW on 7 September. She was chosen from a shortlist of five that also included: An Isolated Incident (Emily Maguire, Picador), The Last Days of Ava Langdon (Mark O’Flynn, UQP), Their Brilliant Careers (Ryan O’Neill, Black Inc.) and Waiting (Philip Salom, Puncher & Wattmann).

The longlist was announced in May.

The judging panel described Extinctions as ‘compassionate and unapologetically intelligent’. ‘In Extinctions, Josephine Wilson explores ageing, adoption, grief and remorse, empathy and self-centredness,’ said judging panel chair and Mitchell Librarian Richard Neville. ‘The novel is a meditation on survival: on what people carry, on how they cope, and on why they might, after so much putting their head in the sand, come to the decision to engage, and even change.’

Wilson receives $60,000 in prize money. The shortlisted authors also received $5000 each from the Copyright Agency’s Cultural Fund in June.

UWA Publishing director Terri-ann White told Books+Publishing it is ‘so clear in the lead up how important the Miles Franklin Award is in both Australia and elsewhere’.

‘Publishers had told me previously that authors have that reversal of offers from agents, rather than rejections, after winning and publishers are swamped by queries and offers for rights sales,’ said White. ‘Well, the emails started an hour after the announcement from publishers known and unknown checking on available rights … I’ve had very little success selling our books overseas so perhaps this is the start of something.’

Extinctions has ‘travelled in the small publisher world so far’, said White, selling ‘in the few thousands’ with ‘the most extraordinary suite of deeply considered reviews’. ‘Alex Miller last night talked about the sales of his first books and described them as the “troughs” that came without “peaks” until his first Miles Franklin,’ said White. ‘The print quantity for a winner reprint is the biggest order we’ve made and we expect there is the ability to reprint again. We are taking this responsibly: cautious and optimistic.’

White said UWAP has ordered a print run of 11,000 winner-branded copies of Extinctions.

Reflecting on ‘how hard it is these days to get invitations to East Coast writers festivals’, White said ‘it has all changed in the last few years’. ‘Some of these festivals now demand we pay speaker’s fees for our writers who live in the same city as the festival,’ said White. ‘I realised how impossible this now makes getting an invite to a writer based in Perth. It broke my heart, but Miles Franklin has now repaired that.’