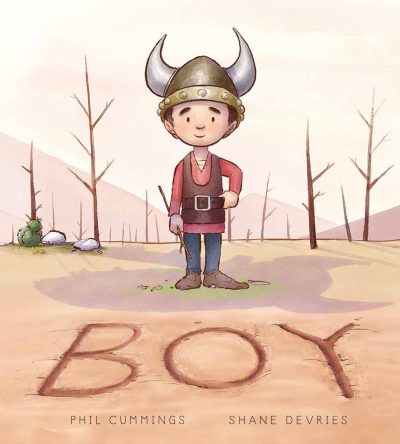 Phil Cummings and Shane Devries’ picture book Boy (Scholastic) has won the Australian Psychological Society’s Children’s Peace Literature Award. It tells the story of a young deaf boy who brings peace to his village by getting adults to think about conflict in a different way.

The Speech Pathology Australia Book of the Year Awards have been announced. The winners are: Noisy Nature (Mandy A Kuhne, illus by Alex Kuhne, Mandy Pandy Books), Me and You (Deborah Kelly, illus by Karen Blair, Viking), Somewhere Else (Gus Gordon, Viking), Mad Magpie (Gregg Dreise, Magabala) and Artie and the Grime Wave (Richard Roxburgh, A&U). The books are judged on their appeal to children, interactive quality and ability to assist in literacy development.

Several Australian authors and illustrators have been nominated for the 2018 Carnegie and Kate Greenaway medals. Zana Fraillon’s The Ones That Disappeared (Lothian) and Garth Nix’s Goldenhand and Frogkisser! (both A&U) are nominated for the Carnegie Medal for writing; and Philip Bunting’s Mopoke (Omnibus), Bob Graham’s Home in the Rain (Walker Books), Pea Pod Lullaby (Glenda Millard, illus by Stephen Michael King, A&U) and Storm Whale (Sarah Brennan, illus by Jane Tanner, A&U), have been nominated for the Kate Greenaway Medal for illustration.