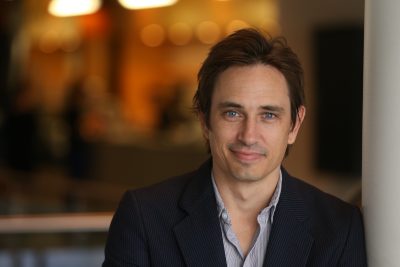 HarperCollins Australia has announced a global deal for Trent Dalton’s debut novel Boy Swallows Universe that will see the book published through HarperCollins companies across major English and translation markets in 2019. HarperCollins Australia rights manager Libby O’Donnell negotiated the six-figure global deal, with translation rights for several other territories still in negotiation. Boy Swallows Universe is the coming-of-age tale of teenager Eli Bell, based partly on Dalton’s own life (pictured), set against the street-level drug trade in 1980s Brisbane.

Megan Goldin’s second novel The Escape Room (Michael Joseph) has sold into North America in a six-figure, two-book deal negotiated by David Gernert of the Gernert Agency on behalf of Penguin Random House Australia. North American rights were acquired by Jennifer Enderlin, publisher at St Martin’s Press. The psychological thriller follows four ruthless Wall Street high-flyers who are trapped in an escape room and must solve the puzzles to earn their freedom, as each of their darkest secrets comes to light.

University of Queensland Press has sold UK and Irish rights to Sally Piper’s The Geography of Friendship and 2014 debut novel Grace’s Table to Legend Press in a two-book deal. Both books will be published in the UK in 2019.

University of Queensland Press has also acquired world (including translation) rights to author Tony Birch’s third novel The White Girl, which provides an insight into the ‘often-precarious state of Aboriginal people’ living under government control in post-war Australia.

UK publisher Lightning Books has acquired world English-language rights (ex ANZ) to Emily Maguire’s crime novel An Isolated Incident (Picador) from Charlie Viney at the Viney Shaw Agency. Lightning Books editor-at-large Scott Pack said Maguire’s novel ‘subverts the traditional crime novel by focusing on the aftermath of the crime, the effect on those left behind, rather than the murder itself’.

In nonfiction, NewSouth Publishing has sold world English-language rights (ex ANZ) to Joy McCann’s Wild Sea: A History of the Southern Ocean to the University of Chicago Press, which will publish Wild Sea in the US in 2019. UCP editor Scott Gast said McCann’s book ‘takes readers to one of the most remote regions on Earth and expands our appreciation of its mystery, power, and fragility’.

University of Queensland Press has sold UK and US rights for Charles Massy’s exploration of sustainable farming Call of the Reed Warbler to Chelsea Green, with publication scheduled for September 2018. Chelsea Green editor Brianne Goodspeed said the publisher ‘has every expectation that Call of the Reed Warbler will cross over strongly into the US and UK markets’. ‘It’s relevant for anyone who eats, who cares about their health and the health of their family, and who cares about the planet,’ she said.

Hardie Grant Travel has acquired world rights to a travel guide book by Indigenous writer Bruce Pascoe. The as-yet-untitled book will look at places in Australia ‘where evidence of Indigenous history has not been highlighted’. ‘When you consider how much tourism is enjoyed by historic sites like Stonehenge and Machu Picchu, it’s curious that we don’t celebrate places in our own country that are evidence of the oldest civilisation in the world,’ said publisher Melissa Kayser. Hardie Grant’s recent Indigenous travel guide, Marcia Langton: Welcome to Country, has been one of the top 10 Australian nonfiction bestsellers in the last two months.