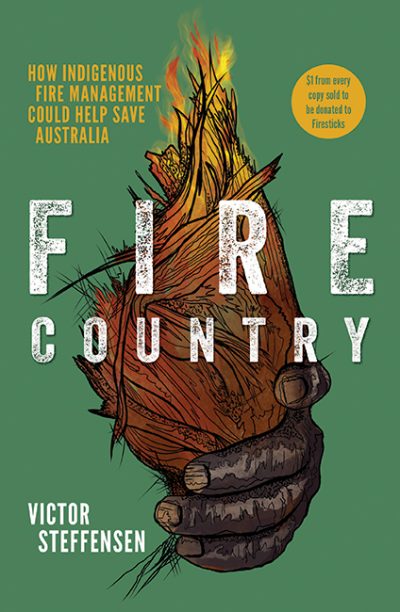 Hardie Grant Travel has acquired world rights to Fire Country, a memoir from Indigenous fire practitioner Victor Steffensen, and has fast-tracked publication for mid-February 2020. Steffensen said, ‘With the rise of climate change and devastating wildfires degrading our landscapes, this book is written in the hope that people will reconnect with the land and prevail against one of the world’s toughest environmental challenges in its history.’ Publisher Melissa Kayser said, ‘Once I understood how much of what’s happening across Australia is in fact avoidable, I felt it was necessary to bring this knowledge to a wider audience as soon as possible.’

The University of Queensland Press has acquired world rights to two books by leading Indigenous scholars: visual artist Fiona Foley’s Biting the Clouds (September 2020), which researches the historical practice of paying Indigenous people in opium; and public intellectual Chelsea Bond’s critical essay collection Another Day in the Colony (early 2021), which is named after a Twitter hashtag Bond created to highlight the everyday nature of colonial violence and structural racism in Australia, in particular, the treatment of Aboriginal and Torres Strait Islander peoples.

Murdoch Books has acquired world rights to a new cookbook from internationally renowned Australian restauranteur, food writer and ‘creator of avocado toast’ Bill Granger, and will publish Bill Granger Australian Food in October 2020 to mark the 20th anniversary of Granger’s first cookbook bills Sydney Food. ‘Bill Granger is an international superstar and his contribution to the world’s love affair with Australian food and the Australian way of life is nothing short of extraordinary,’ said Murdoch Books publishing director Lou Johnson.

Black Inc. has acquired world rights to The Unauthorised Biography of Lachlan Murdoch by author and journalist Paddy Manning (early 2021). The publisher said the book will investigate Murdoch—the eldest son of media mogul Rupert Murdoch—and where he will take the family empire.

HarperCollins Australia has acquired ANZ rights to two new titles from novelist Fiona Lowe in a ‘substantial’ deal. The first, A Home Like Ours (March 2021), centres on a small Victorian town pushed to the edge when racial tensions turn neighbours against each other. HQ Fiction publisher Rachael Donovan said, ‘Fiona’s not afraid to ask deep questions about morals, trust, love and who we think we are, in a way that resonates with modern women.’

HarperCollins has acquired ANZ rights to journalist Jacqueline Maley’s debut novel The Truth About Her (early 2021) in a two-book deal via Jeanne Ryckmans at Cameron’s Management. The novel follows a journalist and single mother who learns the subject of one of her investigative exposés, a 25-year-old wellness blogger, has killed herself. Publisher Catherine Milne described the storytelling as ‘vivid, beautiful and intelligent … in the vein of Anne Tyler, Elizabeth Strout and Ann Patchett’.

Pantera Press has acquired ANZ rights to Lisa Emanuel’s debut novel The Covered Wife (2021) via Catherine Drayton at InkWell Management, describing it as a ‘magnificent literary debut that reads like a thriller’. Emanuel’s novel tells the story of an ambitious young lawyer who falls under the thrall of an oppressive and potentially dangerous religious commune, and of one of its charismatic leaders.

Allen & Unwin has acquired ANZ rights to a new YA thriller by Ellie Marney via Caroline Walsh at David Higham Associates, on behalf of Josh Adams at Adams Literary. None Shall Sleep (September 2020), pitched as a YA Silence of the Lambs, is set in 1982 and focuses on two teens recruited by the FBI to hunt a murderer with the help of their informant—a notorious teenage sociopath. World rights (ex ANZ) have been acquired by Little, Brown Books for Young Readers, which will publish simultaneously in the US.

Hardie Grant Egmont has acquired world rights to a debut YA novel by radio presenter Alex Dyson. When it Drops (May 2020) follows social outcast and bedroom musician Caleb Clifford as he rockets to overnight success when his private song about a crush accidentally goes viral. ‘The moment I started reading When It Drops, I was catapulted into the hilarious, frank and surprisingly deep mind of a teenage boy dealing with life’s problems, both realistic and completely outlandish, and I couldn’t put the book down,’ said publishing director Marisa Pintado. ‘Alex has perfectly captured the voice of a modern Adrian Mole!’