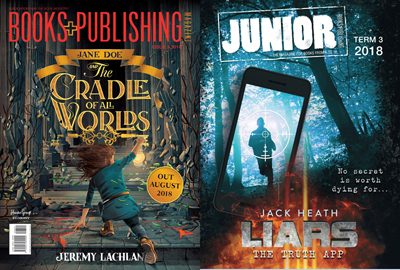 Books+Publishing magazine’s third issue for 2018 is out now! It features 30 reviews of adult and children’s books publishing from September to November.

Reviews: Of the 17 adult books reviewed in this issue, four titles received four and a half stars and above. Fiona Wright’s The World Was Whole (Giramondo) received five stars from Jo Case, who writes, ‘In this exquisite follow-on from her award-winning memoir-in-essays Small Acts of Disappearance, Fiona Wright continues to set the standard for the essay form in Australia.’ Case also interviewed Wright about her book.

Titles that received four and a half stars are: Markus Zusak’s Bridge of Clay (Picador), Stephanie Bishop’s Man Out of Time (Hachette) and David Sornig’s Blue Lake: Finding Dudley Flats and the West Melbourne Swamp (Scribe).

Also in this issue, Sarah Farquharson and Nathania Gilson round up this year’s Christmas releases and Jackie Tang reports on the state of the travel guidebook.

Reviews: Of the 13 children’s and YA titles reviewed in Junior, three books received five stars. They include: Shaun Tan’s Tales from the Inner City (A&U), an ‘extraordinary companion to Shaun Tan’s 2008 book Tales from Outer Suburbia [that] taps into our subconscious, our ancient primitive longings, and our need for love, acceptance and understanding’; Catching Teller Crow (A&U) by Ambelin and Ezekiel Kwaymullina, who ‘subtly weave the history of colonisation throughout the story … themes of grief, racism and violence are balanced with those of family, friendship and survival’; and Lenny’s Book of Everything (A&U) by Karen Foxlee whose ‘writing is brimming with perfectly constructed moments that merge into a truly sensational, heart-wrenching read’.

Features: Jackie Tang picks some highlights from publishers’ Christmas lists; Elizabeth Flux explores the state of the local comics industry; Heath Graham interviews Jack Heath about The Truth App: Liars Book One; and Karys McEwen speaks to Karen Foxlee about her novel Lenny’s Book of Everything.