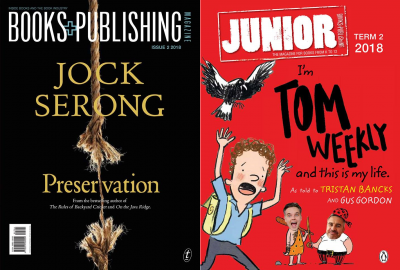 Books+Publishing magazine’s second issue for 2018 is out now! It features 34 reviews of adult and children’s books publishing from July to August.

Of the 17 adult books reviewed in this issue, four received five stars, including several fiction releases. They include Ruby J Murray’s second novel The Biographer’s Lover (Black Inc.), a twist on the trope of the rediscovered artist that blurs the boundaries between ‘past and present, public and private, fact and fiction’; Chris Hammer’s debut crime novel Scrublands (A&U), which reviewer Scott Whitmont predicts will be a hit among crime and mystery fans; and Angela Meyer’s A Superior Spectre (Ventura Press), a ‘brilliant, deeply unsettling work’ about a man who is able to live inside the mind of a Scottish girl in the 1860s.

Features: Affirm Press publisher Martin Hughes explores what the industry can do to tackle sexual harassment in the workplace; Jackie Tang talks to Nielsen Book associate director Julie Winters about the sales bump from literary prizes; Elizabeth Flux looks at how the industry is reaching readers directly through book clubs; and Angela Elizabeth finds out how local publishers are planning to innovate the poetry market.

Also in this issue, Chris Saliba interviews Moreno Giovannoni about The Fireflies of Autumn; Deborah Crabtree talks to Christian White about The Nowhere Child; APA president Lee Walker shares her career journey, Rising Star of the Year winner Shalini Kunahlan shares her hopes for the industry, and Riverbend Books owner and Indigenous Literacy Foundation founder Suzy Wilson reflects on a life in books.

Of the 17 children’s and YA titles reviewed in Junior, three books received five stars. They include Shaun Tan’s Cicada (Lothian), a picture book filled with ‘darkness’ and ‘a rich subtext’ that charts the journey of a cicada living as an office worker; Wren (Katrina Lehman, illus by Sophie Beer, Scribble), which reviewer Bronte Coates praised for its ‘rhythmic prose’ and ‘gloriously colourful’ visual details; and A Song Only I Can Hear (Barry Jonsberg, A&U) about a painfully shy 13-year-old boy who falls in love for the first time, recommended as ‘urgent fiction and a true must-read’ by reviewer Phil Lesnie.

Features: Danielle Binks explores the growing number of local board books in the market; Stacey Malacari reports on the LoveOzYA committee’s survey into the reading habits of the Australian YA community; Jackie Tang talks to publishers, booksellers and librarians on the demand for bilingual and foreign-language books; and Nathania Gilson looks at the art of rejacketing.

Also in this issue, Angela Crocombe asks Jeremy Lachlan about his debut Jane Doe and the Cradle of All Worlds; Jordi Kerr interviews Emily Gale about her YA novel I Am Out with Lanterns; Fremantle’s Paper Bird Children’s Books & Arts director Jennifer Jackson shares her bookseller’s diary; and teacher-librarian and children’s book blogger Megan Daley shares her career journey.