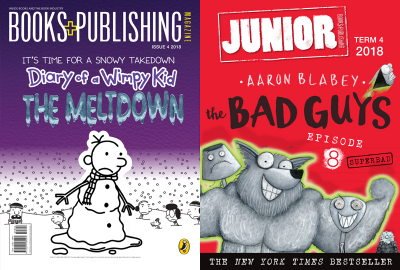 Books+Publishing magazine’s fourth—and final—issue for 2018 is out now! It features 30 reviews of forthcoming adult and children’s books due to be published between December 2018 and March 2019.

Reviews: Of the 17 adult books reviewed in this issue, three titles received four and a half stars and above. Fusion (Hamish Hamilton) by Kate Richards received four and a half stars from reviewer Jacqui Davies who writes, ‘Fusion is contemporary Australian literature at its finest and deserves multiple readings—an ideal selection for book clubs.’ Davies also interviewed Richards about her book.

Other highly rated titles titles are Gerald Murnane’s A Season on Earth (Text), which received five stars, and Minnie Darke’s Star-crossed (Michael Joseph), which received four and a half stars. Reviewer Kat Mayo also interviewed Darke about her book.

Features: Affirm Press publisher Martin Hughes argues that publishing debut fiction in Australia is worth the risk; Julie Gibbs shares her career journey; Catherine Moller reports on the state of rights sales in the UK; Marisa Wikramanayake investigates the challenges for African and African-Australian writers; and Andrew Wrathall and Jessica Harvie examine salaries and job satisfaction in the book industry (an extended version of this article will be published online soon with additional information).

Also in this issue, Sarah Farquharson rounds up publishers’ highlights for 2019 across fiction, nonfiction and poetry.

Reviews: Of the 13 children’s and YA titles reviewed in Junior, two books received five stars: Anna Walker’s Lottie and Walter (Viking), an ‘entirely gorgeous and empathetic book for ages three and up’; and 47 Degrees (Puffin) by Justin D’Ath, whose ‘personal experience lends the narrative an incredible authenticity from the oppressive heat of the day to the hot brown wind and the sting of smoke in the air’.

Three picture books received four and a half star reviews: Mallee Sky, ‘which takes the drought in its stride, neither sentimentalising nor sterilising the devastating potential of the desert’; Queen Celine, ‘a humorous and lively story … that touches on what it means to be a leader’; and Yahoo Creek, a picture book about the mystery of the yahoo (or yowie), which will appeal to young readers ‘with a passion for mysteries and strange happenings’.