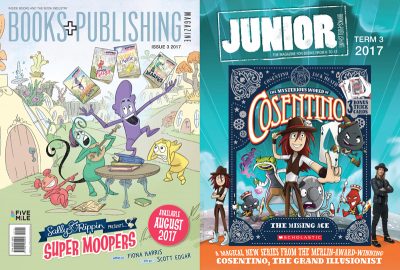 Issue 3 of Books+Publishing magazine is out now!

Reviews: Plenty of forthcoming Christmas highlights are among the 13 adult books reviewed in this issue, with Sofie Laguna’s The Choke (A&U, September), the top-rated title, receiving five stars from reviewer Simon McDonald. He describes Laguna’s third adult novel as an ‘emotionally intense, deeply engaging and quietly haunting’ read about a young girl ‘caught up in the toxic world of bastardised masculinity’.

Features: This issue includes our traditional preview of publishers’ annual Christmas offerings as Andrea Hanke, Brad Jefferies and Sarah Farquharson round up the highlights in fiction, nonfiction and cookery, among many more categories.

Jefferies also explores the reported rise of the audio format and the opportunities it presents for publishers and booksellers, while Hanke looks at the illustrated book market and what publishers are doing to make books beautiful objects and lasting keepsakes.

Elsewhere in the issue, Critical Mass founder and former publisher at Momentum Joel Naoum shares his career journey; Red Kangaroo Books manager Bronwyn Druce gives us an insight into bookselling in the Alice in her bookseller’s diary, Scott Whitmont speaks to Bram Presser about his debut novel The Book of Dirt, and Alexandra Payne tackles the dangers of burnout in the book industry in her regular column.

Reviews: Term 3 is off to a strong start for reviews, with two picture books and one YA novel receiving five stars. ‘Beautiful language’ and ‘superb illustrations’ make for a ‘sublime’ picture book experience in Pea Pod Lullaby (Glenda Millard, illus by Stephen Michael King, A&U, September), which reviewer Margaret Hamilton describes as ‘a profoundly moving love poem, not only for families but also for our planet and all its inhabitants’. Hamilton also gave five stars to family-favourite Alison Lester’s ‘delightful’ new picture book, The Very Noisy Baby (Affirm, November), which has ‘all the trademarks of a Lester success’. YA writers Cath Crowley, Simmone Howell and Fiona Wood have created a ‘beautifully crafted, lively novel’ about three superficially different girls who form a strong friendship in Take Three Girls (Pan, September). In her five-star review, Bec Kavanagh says the novel ‘captures the good and the bad of female friendship’.

Features: In the lead-up to the silly season, Andrea Hanke picks out some Christmas highlights from publishers’ kids and YA lists, while Jackie Tang speaks to Sally Rippin about the direction of her new junior fiction list at Bonnier, ‘Sally Rippin Presents’. Heather Zubek investigates the current trend to focus on science for younger readers, and reviewer Angela Crocombe speaks to Claire Christian about Beautiful Mess, her Text Prize-winning novel about two misfits helping each other through adolescence.