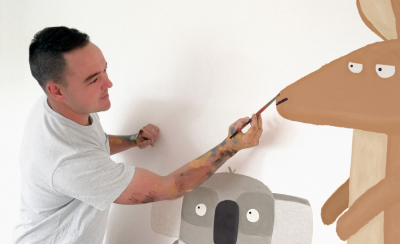 Fremantle Press has sold simplified Chinese rights to Kelly Canby’s picture book The Hole Story—about a boy who discovers a hole and puts it in his pocket—to Shanghai Juvenile & Children’s Publishing House.

Scribe’s children’s imprint, Scribble, has sold North American rights to the picture book Under the Love Umbrella by Davina Bell and Allison Colpoys to Simply Read Books. Rights have previously been sold in France, Italy, Spain and Korea.

NLA Publishing has acquired world rights to the picture book Hiding Moon by Emma Allen and Sher Rill Ng, which was inspired by shadow puppets in the National Library of Australia’s collection. Hiding Moon features shadow play or ‘shadow puppetry’ and draws on traditional Southeast Asian storytelling methods. It will include a nonfiction section about the shadow puppet tradition.

Affirm Press has acquired ANZ rights to debut middle-grade novel Rosebud by bookseller Fiona Hardy. The novel follows 11-year-old Hayley Whelan as she tries to turn her idea for a horror movie into reality over the summer holidays.

Lothian has acquired ANZ/UK rights to two books in a fantasy series by Will Kostakis, who is best known for his contemporary YA fiction. The ‘Monuments’ series is about three teens who ‘inherit the powers of creator gods after stumbling across something unusual in a hidden tunnel beneath their school’.