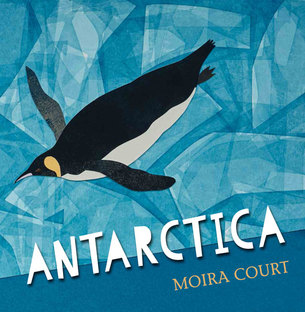 ‘Antarctica’ picture book sold to the US

Fremantle Press has sold US rights to Moira Court’s forthcoming picture book Antarctica to Massachusetts-based children’s publisher Charlesbridge. ‘Charlesbridge’s roots are in nature nonfiction, which is what attracted them to Antarctica,’ said Fremantle CEO Jane Fraser. ‘Their associate editor saw the book featured in the Think Australian catalogue when she was at the Bologna Book Fair, picked up a copy and took it back to the US. They wasted no time in making an offer.’ Antarctica introduces facts about the continent’s wildlife and topography in the format of a counting book, with illustrations that have been hand-created using layered wood block prints, screen prints and collage.

Scribe’s children’s imprint Scribble has sold German-language rights to Davina Bell and Allison Colpoys’ picture books All the Ways to be Smart and The Underwater Fancy-Dress Parade to Suhrkamp. Scribble publisher Miriam Rosenbloom said, ‘Suhrkamp is one of the publishers we most admire in Germany and we’re delighted to have our first German rights deal with this wonderful house.’ The Underwater Fancy-Dress Parade has sold into eight territories across Europe, Asia and North America, while All the Ways to be Smart has sold into six territories, and will publish in North America in September this year as a lead title in Scribble’s North American publishing list.

Hardie Grant Egmont has sold rights in four territories to Welcome to Your Period (Yumi Stynes and Melissa Kang), a ‘frank, funny and age-appropriate guide about getting your period for pre-teens’. North American rights were sold to Walker Books/Candlewick Press in a five-way auction, German-language rights to Carlsen Verlag, simplified Chinese-language rights to Thinkingdom, and Korean-language rights to Studio Dasan.

Exisle Publishing’s children’s imprint EK Books has sold simplified Chinese-language rights to the picture book Saying Goodbye to Barkley (Devon Sillett & Nicky Johnston), the story of a little girl who learns to overcome the sadness of losing her dog.

Hardie Grant Egmont has acquired three new Billie B Brown books by Sally Rippin (illus by Aki Fukuoka) and will publish them in 2020 to celebrate the 10-year anniversary of the bestselling series. The Billie B Brown series currently consists of 20 junior-fiction titles published between 2010 and 2012, with over five million copies sold worldwide. Hardie Grant Egmont managing director Troy Lewis said: ‘In the years since we’ve published Billie, she’s become a household name in children’s publishing, so we’re very excited to celebrate such a milestone by extending the series.’