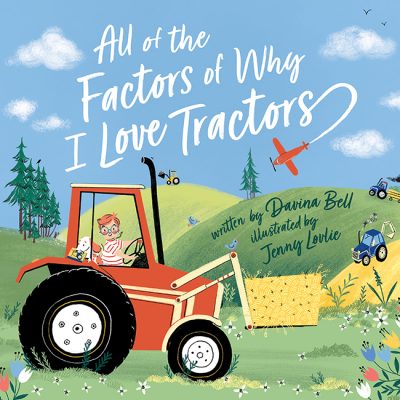 ‘All of the Factors of Why I Love Tractors’ sold to US, Canada

Hardie Grant Egmont has sold US and Canadian rights to the picture book All of the Factors of Why I Love Tractors (Davina Bell, illus by Jenny Løvlie) to HarperCollins imprint Greenwillow. Told in rhyming text, the story centres on a boy who loves borrowing books about tractors from the library—to the exasperation of his mother who would like him to read about something else.

Penguin Random House Australia has acquired ANZ rights to a new series from bestselling YA author Lynette Noni in an eight-way auction. ‘The Prison Healer’ series ‘will take readers on a rollercoaster of twists, turns and thrills, and sweep them up in a love story for the ages’, said the publisher. Auctions are currently underway for multiple territories, with North American and UK publishing deals ‘expected to be announced shortly’. Noni’s previous books include the ‘Medoran Chronicles’ fantasy series, which has sold more than 100,000 copies, and the dystopian thriller Whisper (both Pantera Press).

A film based on John Flanagan’s YA adventure series ‘Ranger’s Apprentice’ (Random House Children’s) has received funding and is expected to begin production in 2020 by Dick Cook Studios, an independent production company established by the former chairman of Walt Disney Studios. The 12-book ‘Ranger’s Apprentice’ series, as well as its two prequels and spinoff series, have sold more than 15 million copies worldwide.