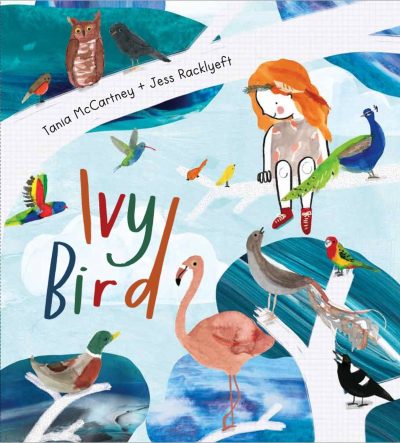 Independent children’s publisher Windy Hollow has sold North American rights to the picture book Ivy Bird (Tania McCartney, illus by Jess Racklyeft) to Blue Dot Books. Ivy Bird introduces younger children to ‘an aviary of beautiful birds’, and is a ‘celebration of nature, friendship, and the love and comfort found in feathering the nest’.

Hardie Grant Egmont has sold US rights to Susann Hoffman’s Girls are Pretty … (smart, clever, fast) and Boys Will Be … (kind, calm, creative) to Penguin Philomel, which will publish the two books as a flip picture book called You Are Awesome. Hardie Grant Egmont described the books—which reject gender stereotypes for small children—as ‘inclusive, uplifting and celebratory’. Hardie Grant Egmont has also sold US and Canadian rights to rhyming picture book All of the Factors of Why I Love Tractors (Davina Bell, illus by Jenny Løvlie) to HarperCollins imprint Greenwillow. Released this month in Australia, All of the Factors of Why I Love Tractors has already been reprinted, and the publisher has commissioned a second as yet unnamed book by the pair for release in 2021.

Penguin Random House Australia has sold UK and Commonwealth rights (ex ANZ) to the YA debut novel You Must Be Layla by Sudanese-Australian writer, engineer and social advocate Yassmin Abdel-Magied. The story follows 13-year-old Layla as she navigates a new school and sets her sights on winning an invention competition. PRH UK Children’s publisher Ruth Knowles said: ‘Layla isn’t someone we yet see often enough in books for our young people and so we are proud and pleased to give this sparky, incredibly lovable character and her story the chance to charm and entertain fans of Jacqueline Wilson and readers of books like Ella on the Outside.’

Penguin Random House Australia (PRH) has acquired ANZ rights to a new series from YA author Lynette Noni titled ‘The Prison Healer’. Rights were acquired in an eight-way auction via Jenny Meyer of Jenny Meyer Literary Agency, on behalf of Noni’s US agent, Danielle Burby of Nelson Literary Agency. Rights to ‘The Prison Healer’ have already sold at auction in Brazil, with auctions currently underway for territories including Germany and Hungary. North American and UK publishing deals are ‘expected to be announced shortly’. Noni’s bestselling ‘Medoran Chronicles’ fantasy series has sold more than 100,000 copies since the first book, Akarnae, was published in 2015, while the dystopian thriller Whisper recently won the 2019 Gold Inky Award.

MidnightSun Publishing has acquired world rights to Sophie Masson’s YA speculative fiction novel The Ghost Squad. Set in ‘an alternative yet jarringly familiar reality’, The Ghost Squad follows 16-year-old Polly after her mother, a respected homicide detective, goes missing, and Polly is subsequently catapulted into a very different world. MidnightSun director Anna Solding called The Ghost Squad ‘an exciting hybrid narrative that blends realism with the disorienting atmosphere of speculative fiction, mixing elements of detective fiction and ghost stories’. Masson is a children’s publisher and the author of more than 60 novels.

Australian production studio BES Animation has acquired world broadcast and digital content rights to the self-published picture-book series ‘Dinner Detectives’, with plans to develop the books into an animated children’s television series. The picture books, which attracted global interest when creators Yves Stening and Nigel Buchanan won Best IP Pitch at MIP Junior in 2018, follows siblings Clementine and Aksel, who travel back in time and around the world learning about the history of the food we eat today.