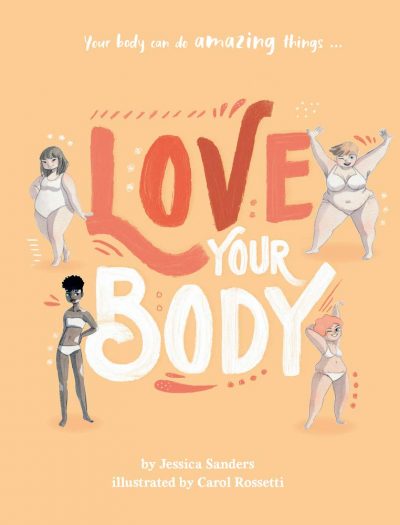 Five Mile sells UK, US and Canadian rights to ‘Love Your Body’

Five Mile has sold UK, US and Canadian rights to Jessica Sanders’ picture book Love Your Body (illus by Carol Rossetti) to the Quarto Group, with the book now sold into 25 territories. Five Mile commercial director Tash Besliev said, ‘Publishing Love Your Body has been rewarding on so many levels, but being able to sell rights into so many territories means the important messages in this book will reach millions and millions of young girls right around the world.’ Sanders’ new book Me Time—pitched as a ‘self-love bible’ that covers ‘physical, mental, spiritual and future selves’—will be published by Five Mile later this year.

US and Canadian rights to environmentalist Tim Flannery’s forthcoming children’s book Explore Your World: Weird, wild, amazing! (illus by Sam Caldwell, Hardie Grant Egmont)—an illustrated nonfiction title that introduces readers to ‘the most bizarre and amazing creatures living on our planet’—have been sold at auction to Norton Young Readers.

Scholastic Australia has sold US and Canadian rights to I’m Australian Too by bestselling children’s author Mem Fox and illustrator Ronojoy Ghosh. The picture book, which will be published in the US under the title I’m an Immigrant Too!, celebrates the many people from around the world who have made Australia their home.

HarperCollins Australia has sold world Spanish-language and Catalan translation rights to three titles in ‘Ruby Red Shoes’ by Kate Knapp—a series of picture books about a ‘very aware hare’ who lives in a caravan with her grandmother—to Grupo Editorial Luis Vives—Edelvives.

Scholastic Australia has acquired world rights to two children’s books written and illustrated by Australian TV personality Rove McManus: the picture book Disgusting McGrossface and junior fiction Rocky Lobstar, the first in a planned series. Scholastic head of publishing Andrew Berkhut said McManus is ‘not only funny, clever and talented, but he has an amazing imagination to write and illustrate hilarious stories for children’.

Hachette Australia has acquired ANZ rights to a middle-grade novel, The Year the Maps Changed, and a yet-to-be-titled YA novel by literary agent Danielle Binks. The Year the Maps Changed is set in a Victorian coastal town in 1999 during the events of ‘Operation Safe Haven’, when the Australian government welcomed some 6000 Kosovar refugees, and takes place over a year in 12-year-old Winifred’s life ‘when everything’s already changing at home, and then the outside world seems to come crashing in’.

Allen & Unwin has acquired ANZ rights to the YA trilogy ‘Dark Rise’ by C S Pacat, author of the adult trilogy ‘Captive Prince’. ‘Dark Rise’ is set in an alternate London where ‘the heroes and villains of long-forgotten war are being reborn, ushering in a dangerous new age of magic’. According to Publishers Weekly, HarperCollins acquired North American rights at auction for a sum ‘rumoured to be in the high-six-figure range’.

Text has acquired world rights to Georgina Young’s Text Prize-winning YA novel Loner, a ‘humorous and heartfelt exploration of new adulthood’, which follows Lona, a girl who spends her days sneaking into the dark room at her old art school and DJing at the roller disco, until she meets a ‘bass-playing, cello-shredding, charming-as-all-hell suitor’. Young’s novel was chosen from almost 300 entries for the publisher’s unpublished manuscript prize.

Krystal Sutherland’s YA novel Our Chemical Hearts (Penguin)—about a high school boy who falls for the mysterious new girl while working on their student newspaper—is being adapted for film by Amazon Studios.