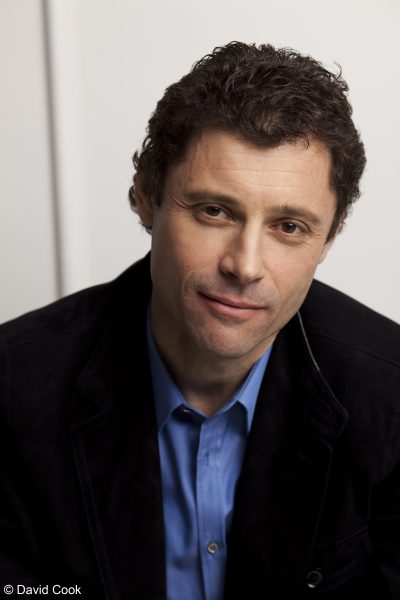 Random House Children’s Books has acquired the first children’s book by award-winning novelist Elliot Perlman (pictured). The Adventures of Catvinkle centres on the unlikely friendship between pampered house cat Catvinkle and Ula the stray dalmatian. Perlman, who was shortlisted for Australia’s Miles Franklin Literary Award for his novels Three Dollars (Vintage) and Seven Types of Ambiguity (Penguin), said he was inspired to write the book after encountering a cat sleeping lazily in a bay window in Amsterdam. ‘This triggered the thought of a blissed-out, slightly selfish cat having its world turned upside down by the unexpected arrival of an animal long totally reviled by cats,’ said Perlman. Australian and New Zealand rights were acquired by Random House Young Readers publisher Zoe Walton, who said the book ‘exudes everything you love about Elliot’s writing—including a gentle treatment of themes of social inclusion, anti-racism and anti-bullying, all of it dripping with humour and warmth.’ Illustrated by Laura Stitzel, the book will be released in Australia in October, with Pushkin Press publishing it in the UK in November.

Hardie Grant Egmont has sold North American rights to Erin Gough’s new queer feminist YA novel Amelia Westlake to Little, Brown imprint Poppy. Rights were acquired by Poppy editor Deirdre Jones, with Hardie Grant Egmont managing director Annabel Barker and rights coordinator Madeleine Manifold negotiating the deal. United Talent Agency film agent Mary Pender has also signed on to represent film rights for the title ahead of its publication in the US. The novel follows two teenage students at an elite all-girls private school, who concoct an elaborate hoax to expose injustice and oust their sexist gym teacher. Hardie Grant Egmont publisher Marisa Pintado said Amelia Westlake was ‘highly political, bitingly funny, and in the wake of the #MeToo movement, deeply relevant and empowering’. ‘As one of the only authors writing queer, own-voice YA in Australia, Erin is a force to be reckoned with,’ she said. Poppy will publish Amelia Westlake under the title Amelia Westlake Was Never Here in the US Spring of 2019.

Black Inc. has sold Nobel Prize-winner Barry Marshall and Lorna Hendry’s middle-grade time-travel adventure, How to Win a Nobel Prize (illus by Bernard Caleo), into eight territories, including to Oneworld Publications in the UK and Kane Miller in the US. Rights were negotiated by Black Inc. international director Sophy Williams, who said feedback from the publisher’s global network of agents indicates ‘every territory is interested in inspiring young people to study science—particularly girls’. In the book, a young girl stumbles on a secret meeting of Nobel Prize-winners and journeys back in time to learn the secrets behind some of the most significant scientific discoveries. Oneworld editor Shadi Doostdar said it ‘sits perfectly among the young feminist literature that is currently enjoying the much-deserved limelight’. The title has also sold into Turkey, Japan, Poland, Hungary, China and Korea.

Text Publishing has acquired YA novel It Sounded Better in My Head by Nina Kenwood through its annual Text Prize for Young Adult and Children’s Writing. The ‘tender, funny and joyful novel’ about hook-ups, awkwardness and ‘unexpected romance’ was chosen from a shortlist of five and more than 200 entries. Text Publisher Michael Heyward said the book is ‘a finely written and compulsively readable story for young adults about someone who is discovering who she is.’ ‘Natalie, Lucy, Zach and Alex are a beautifully drawn quartet of characters. Their dialogue sparkles. Together, they set in train a romantic comedy that will charm and delight readers.’ It Sounded Better in My Head will be published in mid-2019. Text has also acquired shortlisted novel The End of the World is Bigger Than Love by Davina Bell for publication in early 2010.

New Frontier has signed the first licensing deal for its new baby and early years imprint, Catch a Star. The five-year contract will see New Frontier publish a series of board books based on the preschooler television show The Day Henry Met … , produced by Irish company Wigglywoo and distributed by Monster Entertainment. New Frontier will launch the series with four books in October, starting with The Day Henry Met … the Alphabet, with other titles in the series to explore numbers, colours and actions. New Frontier announced the new imprint in October last year, with plans to publish 20 books in 2018.

Other children’s and YA rights sales and acquisitions include: