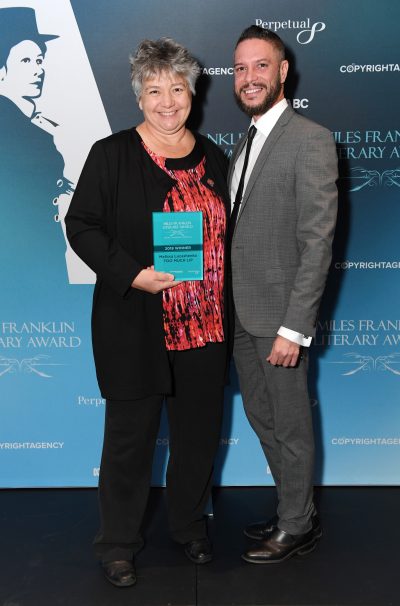 Lucashenko wins 2019 Miles Franklin for ‘Too Much Lip’

Melissa Lucashenko has won the 2019 Miles Franklin Literary Award for her sixth novel, Too Much Lip (UQP).

Lucashenko is the third Indigenous author to win the Miles Franklin in the award’s history, after Kim Scott in 2011 and 2000 (shared with Thea Astley) and Alexis Wright in 2007. She receives $60,000 in prize money, after being named the winner at an event in Sydney on 30 August. Lucashenko was previously longlisted for the 2014 Miles Franklin for Mullumbimby (UQP).

UQP publishing director Madonna Duffy said: ‘The Miles Franklin Award win is the icing on the cake for a novel that has already been receiving awards acclaim and selling well. This win will take it to a whole new audience with the help of Australian booksellers. We already have a 10,000 copy reprint in the warehouse today and we are confident that this will sell quickly. We are also hopeful of overseas rights sales and have been fielding interest overnight already. This is the first time a Queensland-based author has won the award in nearly 25 years, so we intend to celebrate it in every way possible.’

Too Much Lip follows ‘wise-cracking Kerry Salter’, who, after an armed robbery gone awry, returns to her hometown to say farewell to her dying Pop. But Kerry soon finds herself fighting to save her family’s land, burial grounds, history and connection to home.

‘It’s kind of terrifying. I only recently realised that I could be doing so much more in my writing and now this goes and happens. I have no idea what to do next, other than keep plugging away at my civilising mission to mainstream Australia,’ said Lucashenko, who received a $80,000 fellowship from the Copyright Agency’s Cultural Fund in 2016 to work on Too Much Lip.

Chair of the judging panel and NSW Mitchell Librarian Richard Neville said, ‘Too Much Lip is driven by personal experience, historical injustice, anger and what in Indigenous vernacular could be described as “deadly Blak” humour. Lucashenko weaves a (sometimes) fabulous tale with the very real politics of cultural survival to offer a story of hope and redemption for all Australians.’

As previously reported by Books+Publishing, Michelle de Kretser won the 2018 Miles Franklin Literary Award for her novel The Life to Come (A&U).

For more information about the award, visit the website.