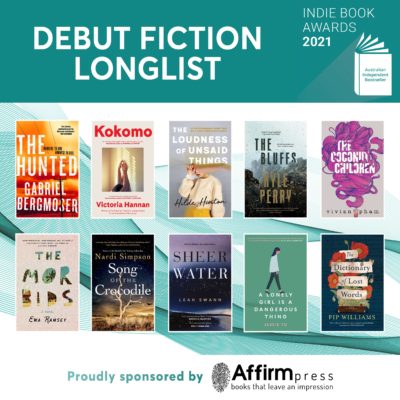 For all those readers who spent this year’s lockdowns catching up on classics or re-reading comforting favourites, never fear—Australia’s independent booksellers have voted for the best debut fiction of 2020 just in time for Christmas. It’s time to catch up on these and some of the other first-time fiction authors who launched their books amid the chaos of 2020.

As 2020 draws to a close we think it’s well worth revisiting some of the best local fiction debuts of the year: novels and short story collections that, through no fault of their own, found themselves up against a relentlessly Covid-filled news cycle and without the usual support of bricks and mortar booksellers (who, overworked and often shuttered-up, could only dream of the uninterrupted face-to-face bookselling that would otherwise have been their days’ work). Most challenging of all for a debut author post-March 2020 in most parts of Australia? No ‘real life’ launch. So, let’s rewind and give them their due.

They may have snuck in just before Australia’s lockdowns, but The Tiniest House of Time (Sreedhevi Iyer, Wild Dingo, February), about a granddaughter who travels from Australia to Malaysia to be with her dying grandmother, and Cherry Beach (Laura McPhee-Browne, Text, February), which follows best friends Ness and Hetty as they move overseas together, did not have long to enjoy their positive reviews before the pandemic hit. Australian Gothic The Salt Madonna (Catherine Noske, Picador, March), The Inland Sea (Madeleine Watts, Pushkin, March), ‘a stylish cli-fi novel, exploring what it means to believe in something’, and The Coconut Children (Vivian Pham, Vintage, March), which was this week shortlisted in the Victorian Premier’s Literary Awards (VPLAs) in addition to being longlisted for the Indies, likewise had little time to shine before the pandemic hit.

When Covid did hit, The Dictionary of Lost Words (Pip Williams, Affirm, April) was the debut that ruled lockdown, but April also brought us literary crime novel Sheerwater (Leah Swann, HarperCollins), Ronnie Scott’s ‘moving and revelatory’ The Adversary (Hamish Hamilton), the VPLA-shortlisted The Animals in That Country (Laura Jean McKay, Scribe) and the multiple award-winning Stone Sky Gold Mountain (Mirandi Riwoe, UQP), which all received excellent write ups from our reviewers. April release and bookseller favourite The Loudness of Unsaid Things (Hilde Hinton, Hachette) also made it onto the Indies longlist.

In May, the ‘well-structured, psychologically both subtle and engaging’ The Things She Owned (Katherine Tamiko Arguile, Affirm) was one of Kerryn Goldsworthy’s picks of the week in the Sydney Morning Herald, while B+P reviewer Hilary Simmons found Night Lessons in Little Jerusalem (Rick Held, Hachette), about a Jewish teenager living in Czernowitz during WWI, ‘an impressive and gripping debut that blurs the line between memoir and fiction’. June saw the release of Penguin Literary Prize-winner The Spill (Imbi Neeme, Viking), ‘a clear-eyed, compassionate novel with crackling dialogue and endearing characters struggling to put together the fragments of a misremembered past’ according to Roanna Gonsalves writing in the Saturday Paper.

Melbourne’s second lockdown coincided with the release of The Fogging (Luke Horton, Scribe, July), a ‘gripping, subtle psychological tragedy’, according to reviewer David Little, who spoke with the author for B+P. A Lonely Girl is a Dangerous Thing (Jessie Tu, A&U, July) impressed our reviewer Sydnye Allen, Kokomo (Hachette, August), won many fans, including B+P’s Ellen Cregan, who chatted with author Victoria Hannan about winning the VPLA for an unpublished manuscript, while The Morbids (Ewa Ramsay, A&U, September) was described by Fiona Wright in the Guardian as a book ‘that treats the serious mental illness at its heart in with complexity and compassion’ while also being ‘lively and often very funny’. Tu, Hannan and Ramsay all find themselves on the Indies shortlist for best debuts in 2020, alongside Nardi Simpson, whose Song of the Crocodile (Hachette, October), which follows three generations of the Billymil family, has also been shortlisted for the Victorian Premier’s Award for Indigenous writing. ‘Simpson’s writing attains a rare quality of grace in the novel, the prose lyrical and grounded at the same time,’ wrote Khalid Warsame, reviewing Simpson’s debut for the Saturday Paper.

The winner of the 2019 Michael Gifkins Prize for an unpublished novel, Soldiers (Tom Remiger, Text, September), ‘is without parallel in recent New Zealand literature’ according to reviewer David Herkt, while another manuscript prize winner with a New Zealand connection, State Highway One (Sam Coley, Hachette, September), garnered praise from critic Chloë Cooper, who, writing in the Australian Book Review (ABR), described it as ‘absorbing’ and ‘a suspenseful page-turner’.

The Christmas 2020 list certainly has its share of big Australian names, with new books from Craig Silvey, Trent Dalton, Jane Harper, Di Morrissey and Matthew Reilly on the shelves, but the last quarter of the year also offered some excellent debuts. It’s Been a Pleasure, Noni Blake (Claire Christian, Text, October), Christian’s first adult novel, is ‘the fun, wise, progressive chick-lit story to get us through 2020’, according to reviewer Kate Cuthbert. Everything in its Right Place (Tobias McCorkell, Transit Lounge, October) ‘is exhilarating and profound, and may just be Melbourne’s grittier answer ​to Boy Swallows Universe’, wrote Chloë Cooper in Kill Your Darlings, while B+P reviewer Georgia Brough said Lucky’s (Andrew Pippos, Picador, November) ‘is layered and romantic in every sense of the word, spanning generations and telling a moving story of an immigrant family trying to find a footing in post-war, multicultural Australia’.

Our reviewers also enjoyed many of the debut short story collections on offer in 2020. Nathan Smith described the Dominic Carew’s No Neat Endings (MidnightSun, February) as ‘a strong meditation on masculinity in Australia and its many fault lines’, while Australian masculinity was also in the sights of Wayne Marshall, whose Shirl (Affirm, February) is ‘a hugely entertaining and thoughtful read’, according to reviewer Myles McGuire. A Couple of Things Before the End (Sean O’Beirne, Black Inc., February) offers stories in the form of fictional monologues, letters, speeches, interviews, texts and emails, diary entries, official reports and online comments, all invoking ‘Australia with its questionable past, ironic present and disturbing future’.

In Broken Rules and Other Stories (Transit Lounge, September) Barry Lee Thompson ‘makes delicate inquiries into the passage of time through a series of loosely linked, often coming-of-age stories … with a sensitivity attuned to life’s inevitable waystations’, while Rural Dreams (Margaret Hickey, MidnightSun, October) brings together ‘stories of sadness and fear, but also of beauty and simplicity, and more than a few Kath & Kim–style laugh-out-loud moments’, wrote reviewer Hannah Cartmel.

Reviewing Wild, Fearless Chests (Mandy Beaumont, Hachette, March) in the Canberra Times, Zoya Patel said there is ‘no denying the force of Beaumont’s writing—her ability to create simple images that stay with the reader for days, and to spin words in a way that is at once elegant and brutal in their emotional impact is a pleasure to behold’, while Debra Adelaide praised the ‘stunning’ stories in Jo Lennan’s In the Time of Foxes (S&S, May) in her review for ABR.

Finally, it wouldn’t be Christmas without a healthy offering of crime fiction, and 2020 gave us plenty of good Australian debuts to choose from: The Bluffs (Kyle Perry, Michael Joseph, July) made the Indies shortlist for best debuts across all categories, Sticks and Stones (Katherine Firkin, Bantam, June) is ‘an assured debut for fans of Sarah Bailey and Chris Hammer’, according to B+P reviewer Fiona Hardy, and The Hunted (Gabriel Bergmoser, HarperCollins, August) uses the ‘darker shades of the Australian landscape and psyche’ to great effect, according to Deborah Crabtree. She also enjoyed the cosy crime novel Death Leaves the Station (Alexander Thorpe, Fremantle Press, October), a book that ‘doesn’t shy away from exploring issues such as race and gender as it entertains, with cleverly placed clues and red herrings sure to keep readers guessing’.