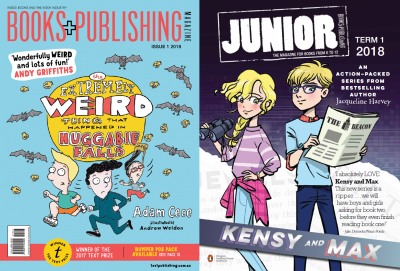 Books+Publishing magazine’s first issue for 2018 is out now! It features 26 reviews of adult and children’s books publishing in April to June.

Reviews: Of the 13 adult books reviewed in this issue, the two most highly rated are both set against expansive Australian landscapes: Holly Ringland’s The Lost Flowers of Alice Hart (Fourth Estate) and Peter Cochrane’s The Making of Martin Sparrow (Viking), which both received 5 stars from reviewers. The Lost Flowers of Alice Hart tells a ‘compelling story of female survival’, and reviewer Claire West praises the story of isolated young Alice—sent to live on a farm with her estranged grandmother, while she grapples with family secrets—as ‘deftly handled’. Meanwhile, reviewer Chris Saliba recommends Cochrane’s novel for its ‘broad cast of extraordinary characters’ and ‘evocative, muscular prose’.

Several books received 4.5 stars, including The Bookshop of the Broken Hearted (Robert Hillman, Text), which reviewer Joanne Shiells calls a skilful depiction of ‘both the horror of Auschwitz and the placidity of the Australian bush’; Robbie Arnott’s Flames (Text), an exploration of ‘the messy, overwhelming nature of grief with a magical twist’; Staying: A Memoir (Jessie Cole, Text), which reviewer Hilary Simmons calls ‘both illuminating and absorbing’; and Traumata (Meera Atkinson, UQP), ‘a powerful memoir and a political treatise’ that ‘strikes new ground’ in exploring the societal effects of trauma.

Features: Affirm Press publisher Martin Hughes advocates for the ‘slow’ nature of books in the first of his columns for Books+Publishing, while Danielle Binks investigates how publishers and authors are using new digital marketing and promotional strategies.

Reviews: Of the 13 children’s and YA titles reviewed in Junior, three books received five stars. They include middle-grade title How to Win a Nobel Prize (Barry Marshall & Lorna Hendry, illus by Bernard Caleo, Black Inc.), which reviewer Heath Graham praises for its ‘fun and fast-paced’ story; Amelia Westlake by Erin Gough (Hardie Grant Egmont), ‘a clever engaging feminist [YA] romp’, according to reviewer Angela Crocombe; and The Long Class Goodnight by Sammy J (Five Mile), which reviewer Karys McEwan praises as ‘a rollicking tale full of comedic gold’ that ‘will have middle-grade readers roaring with laughter’.

YA novel Neverland by Margot McGovern (Random House) was close behind, receiving 4.5 stars from reviewer Lian Hingee who describes it as a ‘dark and compelling examination of memory, self-determination and the dangers of romanticising the past’.

Features: Jacqueline Harvey talks about her new adventure series ‘Kensy and Max’; Sarah Farquharson speaks to new Australian Children’s Laureate Morris Gleitzman; Lorien Kaye explores how the industry is reaching out to reluctant girl readers; and Danielle Binks takes a closer look at the rising trend of horror in middle-grade and YA fiction.

Also in this issue, Lian Hingee interviews Margot McGovern about her debut YA novel Neverland, and Holly Harper asks 2017 Text Prize-winner Adam Cece about The Extremely Weird Thing That Happened in Huggabie Falls.